Lough Gill and the island of Innisfree as seen in the photo, inspired William Butler Yates to write the poem 'The Lake Isle Of Innisfree'.

Lough Gill and the island of Innisfree as seen in the photo, inspired William Butler Yates to write the poem 'The Lake Isle Of Innisfree'.

Lough Gill is an 8km long limestone lake, lying just east of Sligo Town. It features underwater cliffs and due to its natural eutrophic state, it is listed as a protected site under the EU Habitats Directive. The lake also supports a number of protected species of lamprey, as well as Atlantic Salmon and otter.

The lakeshores of Lough Gill comprise of an Old Oak Woodland known as Slish Woods. The area is dominated by oak, rowan and willow, but are also home to a number of other species such as yew, strawberry tree, and the rare Bird Cherry and Rock Whitebeam. A large fauna population is also present in the woodland, and particularly noteworthy is the established community of pine martens.

Lough Gill supports a much smaller population of wintering waterfowl than Lough Arrow, and is primarily comprised of Tufted Duck, Mallard Duck, and Goldeneye Duck. 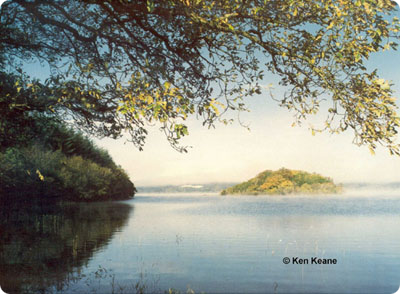 Some of the islands on Lough Gill are used as breeding sites by Common Terns. However, the lake’s most famous island is Innisfree, immortalised W.B.Yeats in his poem Lake Isle of Innisfree:

I will arise and go now, go to Innisfree,
And a small cabin build there, of, clay and wattles made;
Nine bean rows will I have there, a hive for a honeybee,
And live alone in the bee-loud glade.

And I shall have some peace there, for peace comes dropping slow,
Dropping from the veils of the morning to where the cricket sings;
There midnight's all a-glimmer, and noon a purple glow,
And evening full of the linnet's wings.

I will arise and go now, for always night and day
I hear lake water lapping with low sounds by the shore;
While I stand on the roadway, or on the pavements gray,
I hear it in the deep heart's core.

This poem was first published in Yeats' second collection of poetry, The Rose in 1893.