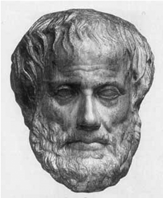 Aristotle was a very early scientist, who said   that heavy objects fall faster than light ones. His ideas on this and many other areas in science (e.g. he said the Earth was at the centre of the universe) were believed   by   most people for nearly two thousand years;   when Galileo and Newton came along and proved him wrong.