Jerpoint Abbey is located 2kilometres south of Thomastown in County Kilkenny. It was built originally in 1160 for the Benedictine monks by the King of Ossory, Donal MacGillapatrick.

20 years later, it was taken over by Cistercian monks from Baltinglass Abbey in County Wicklow.

The Cistercians are an order of monks which were founded in the town of Citeaux, France in 1098. They are sometimes called 'The White Monks' because of the colour of their habits.

The Cistercians follow the ancient Rule of Saint Benedict, which comes from the 6th century. This is based on three central themes; peace, pray and work. They were very hard workers and would spend a lot of time working in their gardens to provide food for themselves.

As they had no contact with the outside world, everything they needed was found within the abbey. 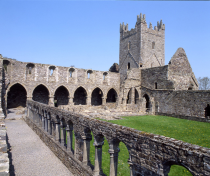 Records show that by 1228 there were 36 monks and 50 brothers living in the abbey.

The abbey was improved in appearance in the 15th century by a cloister sculpted with almost life-size figures. An imposing crossing tower was also added at that time. However, the next century saw the dissolution of the monasteries.

The dissolution was the name given to the process where all monasteries in England, Scotland and Ireland were disbanded and the property confiscated. This happened between 1536 and 1541 at the orders of Henry VIII.

In 1540, the abbey was granted on lease to James, the Earl of Ormond by the English crown. The lease included some 6,000 hectares of land belonging to the abbey including watermills, cottages, weirs, fisheries and a castle.