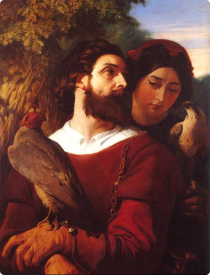 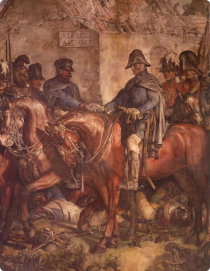 From his earliest days in Cork, Maclise was fascinated by legend and history. He loved everything medieval, military, and grand: battles, medals, heraldry, Shakespearean tragedy, chieftains, princes and princesses. The glorious past fired his imagination and seemed to console him emotionally as well as artistically. He had won the gold medal at the RA for his history painting, Choice of Hercules, and it was history that would provide him with his greatest tasks in art. The art historian and greatest Maclise expert, John Turpin, has written: "he was one of the few painters in the history of British and Irish art who could paint monumental narrative scenes with success. This was his principal achievement."

Inspired by Sir Walter Scott's The Lay of the Last Minstrel, he painted The Chivalrous Vow of the Ladies and the Peacock in 1835; and equally inspired by Moore's Lallah Rookh he painted The Veiled Prophet of Khoressan in 1832, a work that brought him an eighty guineas prize and Associate membership of the Royal Academy. His first important history painting was The interview between Charles I and Oliver Cromwell, painted in 1836, the same year that his illustrations for Reliques of Father Prout were published in book form. In the mid 1840s Maclise spent some time in Paris, on visits with his brother Joseph, and Dickens, among others. On these visits he was deeply impressed by French painting, and his ambitions as a painter became more grand and monumental. Back in London, he presented a cartoon, sketch, and fresco specimens to the Fine-Art Committee of the Palace of Westminster and was chosen to paint The Spirit of Chivalry for the House of Lords in 1848. One year later he painted a companion fresco, The Spirit of Justice.

In 1858 Maclise was commissioned to paint two giant commemorative frescoes for the Royal Gallery of Westminster Palace, The Meeting of Wellington and Blücher and The Death of Nelson. Painting these massive works in a new German-inspired 'water glass' technique would be the crowning achievement of Maclise's public career - and, most certainly, the ruination of his health and well-being. Maclise worked on these paintings for seven exhausting years, doing technical and historical research as well as the actual painting. Following the death of Prince Albert, a true friend and admirer of Maclise, all the other plans for further decorative, illustrative work were cancelled at Westminster, and Maclise retreated into a more private realm.