19th Century to the Present Day 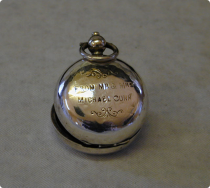 A silver sovereign case engraved on one side with the words Gaiety Theatre 25th Anniversary, 27 November 1896 and on the other with From Mr & Mrs Michael Gunn. It was manufactured by Waterhouse, Dublin. Size: 0.3.5 x 0.03 x 0.01.5 Material: silver ownership: Old Dublin Society

A silver sovereign case engraved on one side with the words Gaiety Theatre 25th Anniversary, 27 November 1896 and on the other with From Mr & Mrs Michael Gunn. It was manufactured by Waterhouse, Dublin. Size: 0.3.5 x 0.03 x 0.01.5 Material: silver ownership: Old Dublin Society 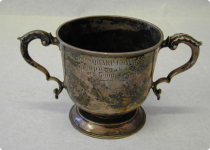 By the end of the century fashions were changing again. This elegant period was being criticised as too neat and pretty, although examples of bright-cut engraving are found throughout the nineteenth century and this type of decoration never really died out. The nineteenth century opened with the Act of Union, which united the Kingdom of Ireland with the rest of Britain. The Irish gentry returned to England and, with their departure, the continuity in design was lost. The Union had crushed any hope of cultural revival and the silversmiths in Dublin had to cope with factory production in England, which had brought the price of mass-produced silverware within the reach of a growing middle-class market. Furthermore, because of the abolition of tariffs, it was easier to import and assemble parts from England than to go to the high expense of making hand wrought silver and many silversmiths had to shut up shop; a few managed to survive and carried on making silver with a heavy form of repoussé decoration, similar to the Rococo period but not as elegant in form. By 1840, however, a new interest was being shown in antiquarian studies and this had a most profound and striking effect on the making of silver jewellery.

In 1849, the Royal Irish Academy gave permission to make copies of antique brooches in its collection. This was the start of a new revival in the manufacture of silver, resulting in an extensive souvenir trade. Many Dublin silversmiths crafted imitation pieces and exhibited at the Crystal Palace, London, in 1851 and at the Dublin exhibitions of 1853 and 1856. Other Irish motifs, such as the shamrock, the harp, the Celtic cross and interlace work, began to appear and, by the end of the century, most Dublin silver carried one, if not all, of the above forms of decoration. In 1894, the Arts and Crafts Society of Ireland was formed to foster artistic industries in Ireland, holding its first exhibition in 1896. Several Dublin silversmiths entered copies of sugar bowls, cream jugs, Ardagh chalices and meythers, together with many copies of Irish brooches. Much the same could be said for the Arts and Crafts exhibition of 1899.

The silver trade moved into the twentieth century still copying old designs. By 1926, the public were tiring of Celtic interlacing and of round towers and shamrocks, as was evident in the designing of the new, Irish Free State coinage of that year. To try and counteract this, silversmiths were brought from Sweden, parts of Europe and England in the 1950s to train the local crafts people in the ways of modern design. The Company of Goldsmiths, the body responsible for testing and hallmarking precious metals, for the first time since its foundation in 1637 brought out a commemorative hallmark for the golden jubilee of the Rising of 1916. During that year, many pieces were commissioned and the silver trade showed an upward trend. A further special mark was introduced in 1973 to commemorate Ireland's entry into the European Economic Community, which helped to bolster up the manufacturing silversmiths in Dublin.

Other commemorative marks followed, the most recent being in 2000, to mark the close of the century and the birth of a new era. Today, new generations of highly skilled silversmiths carry on the age-old craft of hand raised silver. The tools, as well as the methods, go back as far as recorded history. A finished piece of silverware should be judged by the amount of thought that has gone into its creation, which should in turn induce aesthetic pleasure in the person handling or using that particular item. This principle of superb quality and good design has been carried down the centuries and applies as much today as it has done in the past. This becomes evident when viewing the outstanding collection of antique and modern silver at the Museum of Decorative Arts and History at Collins Barracks, Dublin 7.