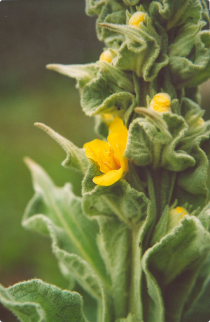 Mullein (Verbascum thapsus): A wild flower plant with densely packed flowers on a spike. The leaves are covered in a downy, whitish coating made up of tiny hairs. It flowers from June to August. It is a medicinal herb, used traditionally for respiratory complaints.

Mullein (Verbascum thapsus): A wild flower plant with densely packed flowers on a spike. The leaves are covered in a downy, whitish coating made up of tiny hairs. It flowers from June to August. It is a medicinal herb, used traditionally for respiratory complaints.

Mullein is a native plant, which was sometimes called Our Lady's Candle by country people or Coinneal Mhuire in Irish. Its appearance suggested a tall yellow candle when in flower. In Ancient Rome dried Mullein plants were dipped in tallow and used as candles. Mullein can grow from 4 to 6 feet in height, spiked with tiny yellow flowers when in bloom from June to August. The leaves at the base of the plant are fairly numerous, grey-green in colour and woolly to the touch. Mullein grows easily from seed and is sometimes found by the side of the road on the Aran Islands, near gravel and sandy areas. In Ireland it is often grown as a garden plant. The above photograph was taken on waste ground at the side of Ferndale road near Loughlinstown.

The parts used from the Mullein plant are the leaves and the flowers. Long ago in Ireland they were successfully used to relieve the symptoms of consumption (TB). In the 1850's a chemist in his 20's cured himself of this illness while in a sanatorium by using infusions of Mullein leaves and flowers in milk. Afterwards he changed his job to supplying herbal remedies by mail order from plants gathered in the Dublin Mountains near Rathfarnham.

Mullein acts as an expectorant in coughs and other bronchial disorders. Long ago in County Laois the leaves from Mullein were dried, put in a clay pipe and smoked like tobacco. In order to be effective the smoke was inhaled. Mullein leaves were applied externally for treating ulcers associated with varicose veins. They were bruised, dipped in hot water until they wilted, placed over the affected area and covered with layers of cotton secured with gauze. Poultices were also used for swellings, sores and neuralgia.

In some countries healing oil is produced by soaking Mullein flowers in oil before exposing them to the sun or other heat for two weeks. This oil was used to treat haemorrhoids, bruises, frostbite, eczema and inflamed eyelids.