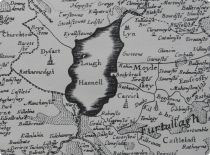 Section of the 1685 Petty map of Westmeath from Hiberniae Delineations showing Lough Ennell. Sacle of 1 inch to 2 Irish miles

Section of the 1685 Petty map of Westmeath from Hiberniae Delineations showing Lough Ennell. Sacle of 1 inch to 2 Irish miles

O'Donovan's Ordnance Survey Letters trace the beginnings of the name Lough Ennell or as it is known in Irish Loch Ainninn. According to tradition the present day Lough Ennell and Lough Owel derive their names from two brothers, Ainninn and Vair who lived at the lakes. The brothers were sons of the Kings of the Fir Bolg who fled from the tyranny of the Greeks to Ireland and it was at their respective lakes that Ainninn and Uair died giving the lakes their names. One lake lay north (Uair) and the other south (Ainninn). Over the years the name became anglicised to Lough Inill. In the inquisitions the lake became Lough Enyn or Lough Enyll. When the Rochforts took the title as Lords of Belvedere they tried to change the name Lough Ennell to Lake Belvedere.

Located approximately 5 km (3 miles) south of Mullingar on the N 52, Lough Ennell is 9 kms (4½ long by 4 kms (2½) wide), with an area of around 3,2000 acres (1,300 hectares). A dominant feature of this lake is its vast area of shallow water. Almost two-thirds of its area is less than 8m (25ft) deep and nearly half of it is under 3m (10ft) deep. Lough Ennell is dotted with islands, many islands which have now become attached to the shoreline as the levels of the lake have changed.