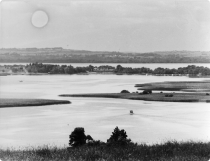 Black and white photograph of Lough Ree from Ballykeernan

Black and white photograph of Lough Ree from Ballykeernan

One of the great Shannon lakes, Lough Ree is 29 km in length, running from Lanesborough in County Longford to Athlone in County Westmeath. Westmeath shares this lake with counties Longford and Roscommon. The Greek cartographer, Ptolemy, working in the second century marked a placename 'Rheba' on his map of Ireland. The location of Ptolemy's 'rheba' is not far from the present Lough Ree. There is little doubt that this word is derived from Rib or Ribh the name which the lake still bears.

Lough Ree translates as 'The Lake of Kings' and local lore suggests that it was called the 'Lake of Kings' because of seven kings (all named John) who once ruled Rindoon - however historians have failed to substantiate this claim - John O'Donovan was told that it was called after twenty-seven kings who lived in St. John's.  He dismissed this notion, as only he could "This is not worth attention, it being one of those fooleries got up by ignorant people to account for names in the absence of history". A sixth century saint, Saint Rioch, was associated with a monastery on Inchbofin.  It is not beyond the bounds of possibility that the lake is named in his honour.