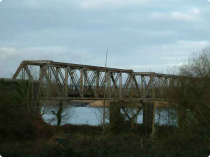 The Waterford, Dungarvan and Lismore Railway opened on 12th August 1878. It was 43 miles long and took six years to build. It followed a scenic but difficult route containing 53 level crossings, the Durrow brick-faced tunnel and stone viaducts at Barnabuide and Durrow.

The Waterford & Suir Valley Railway, a voluntary community project operates a narrow gauge railway as a tourist attraction on a 10km section of the abandoned Waterford, Dungarvan and Lismore Railway from Kilmeadan Station in to Bilberry, just outside Waterford City. Visitors can enjoy a 17km round trip from Kilmeadan Station to Gracedieu Junction, taking in spectacular scenery along the Suir Valley in County Waterford and across the river to County Kilkenny. Full information is available on the website www.wsvrailway.ie and www.facebook.com/wsvrailway