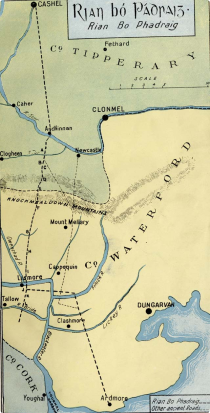 The 'Rian Bo Phadraig' is an early ecclesiastical highway, possibly a fifth to seventh century roadway or track linking the ancient ecclesiastical centres of Cashel in Co. Tipperary and Lismore in Co. Waterford. The continuation of the Rian southwards from Lismore to Ardmore suggests an association with St. Declan of Ardmore who preached Christianity in Munster counties prior to St. Patrick.

The Ardmore route is explored is some detail by Michael Mulcahy in his article 'St Declan's Road' in the Ardmore Journal, 1988. It is worth noting that in early Christian times there were main roads from provincial capitals to outlying parts of a province. Thus, for example, early tradition refers to St. Declan driving his chariot from Ardmore to Cashel. At that time roads from Cashel connected primary sites in Thomond, Kerry and strongholds of the Decies. All provincial capitals in turn were connected with Tara by the four great roads which dramatically converged there.

The standard reference for those interested in the the Rian is Rev. P. Powers The Rian Bo Phadruig the ancient highway of the Decies, published in The The Journal of the Royal Society of Antiquaries of Ireland, 1905.

Next - Tracing the Rian