It will come as something of a surprise to learn that almost all of the buildings of these monasteries, both churches and dwellings, were made of wood for the first four centuries or so of their existence - and some churches probably continued to be built in the same material until the decline of the monasteries towards the end of the twelfth century. The only known monks' cells to be made of stone were the so-called beehive huts found in West Kerry and elsewhere up the Atlantic coast - and, most famously, on the island of Skellig Michael where they could, however, have doubled also as pilgrim hostels.

We get some idea of a wooden church of the seventh century through Cogitosus' description of St. Brigid's unique church at Kildare, which accommodated monks and nuns separately, while another roughly contemporary text, the Hisperica Famina, suggests the presence of a central altar. These wooden churches probably had stout corner posts jutting out beyond the gable-wall, as suggested by antae which are corner projections on some early stone churches that could have been translations into stone of their wooden predecessors, as suggested by St. Macdara's church in Connemara.

Some of the earliest surviving churches appear to be rectangular oratories found along the Atlantic coast, and best exemplified by Gallarus oratory at the end of the Dingle Peninsula. In them, the corbel technique, with inclining circular layers of stone placed one on top of the other until they converge in one central stone at the top, was adapted from the beehive huts for use in rectangular buildings, like Gallarus, with the long side walls arching inwards towards one another until they met in a central ridge at the top. The disadvantage of building a rectangular structure in the corbel technique was that the long walls tended to sag and then collapse - which is what has happened to the great majority of the twenty or so oratories of this type, including one probable example excavated recently on the summit of Croagh Patrick. It is a tribute to the master mason who built Gallarus oratory that the same fate has not befallen this paragon of mortar-less stone craftsmanship ( where, however, a worrying sag is already noticeable).

While some few stone churches may have been built before 800 at large religious centres such as Armagh, it is likely that almost all of the surviving stone churches were built after that date, when the Irish began to revive the reverence for the monumental power of stone. A concomitant reason why the Irish decided to change from wood to stone may have been the advent of the Vikings who demonstrated in the ninth century how easy it was to burn wooden churches - after they had robbed them of their treasures, of course. 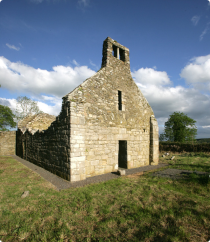 Image courtesy of Dept. of Environment, Heritage and Local Government
Enlarge image
Such corbelled oratories of Gallarus type are west-coast adaptations of local techniques originally practised on round huts, and they probably played little or no role in the development of the oldest 'main-stream' stone churches with upright walls which did use mortar in their construction. The largest known pre-Norman church of the type is the Cathedral at Clonmacnois, built around 908. Its original measurements of 18.8 x 10.7m make it, nevertheless, very much smaller than its contemporaries on the European mainland. Ireland seems to have preferred a number of smaller churches rather than a single large one, as seen at pilgrimage places such as Glendalough. The smallest of all, such as St. Ciarán's at Clonmacnois, or Teach Molaise on the island of Inishmurray off the Sligo coast, were built as tomb-shrines to house the relics of the founding saint around the ninth century, and it is they which may have provided the impetus to construct slightly larger stone churches at many of Ireland's monastic sites. The second largest of these pre-Norman structures is the nave  of the Cathedral at Glendalough, where we also find some of the rare cases of churches with contemporary nave and chancel which were probably products of the eleventh century.

Unlike most of the early medieval churches east of the Shannon, those west of the great river only rarely have antae of the kind mentioned above, but they are noted for having been built with extremely large stones in the bottom courses of their walls in what is known as cyclopean masonry. This style almost certainly continues into the twelfth century, if not beyond. The earliest documented church west of the Shannon, which has antae, is at Tuamgraney in County Clare, where it was built by an abbot who died around 966. It has a feature typical of these early stone churches, namely a west doorway which inclines inwards towards the top, occasionally, as at Tuamgraney, with an architrave around it, or, as at Clonamery, Co. Kilkenny, with a cross above the massive covering lintel-stone. Windows, on the whole, were small and undecorated, while the roof was probably made of wood or thatch.

Sceilg Mhichíl, also known as Skellig Michael, is situated on a remote island about 12km off the coast of Ballinskelligs in Co. Kerry. This monastery is over a thousand years old. This illustration of the monastic cells show their small stone huts also known as beehive huts where the monks lived and prayed.

Trinity Church, one of the seven churches of Glendalough, Co. Wicklow is located outside the monastic city walls. It is an excellent example of an early Irish stone church or Daimliag. It dates from the eleventh century, and was probably built on the site of an earlier wooden church.

An image of Teach molaise church on the island of Inishmurray

A view of Clonmacnoise. A replica of the remains of the North Cross can be seen in the foreground.