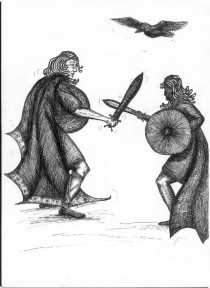 Fergus mac RĒoch of Ulster led the army of Ailill and Medb but steered them circuitously in order to give his old comrades time to assemble themselves for resistance. Queen Medb was not to be caught out, though, and she said to him 'Mac RĒoch, why is it you take us south, then north, and every other way but the most direct? My husband and our men might smell treachery, or else that your heart is not set for conflict against your abandoned friends. If this last is true maybe you should make way for a more determined and full-hearted leader.'
But Fergus responded: 'This is Ulster we're heading to, Medb, and remember I know it best: I am taking you by this and that way so the host comes to no harm before its time, but mostly to avoid that man who guards the plain of Muirtheimne. I take you onwards, but most definitely away from C·chulainn."

At Iraird Cuillean two chariots were at the fore and these were belonging to Err and Innel, whose drivers were Foich and Fochlam. These four were the sons of Urard mac Anchinne, and they came across the the spancel hoop left by Cuchulainn. They saw the marks of the grazing horses; where C·chulainn's had licked the grass, roots and all, and even the clay beneath down to the bedrock. The four held that place until the armies behind caught up with them. They gave the hoop to Fergus, who stood reading the Ogam cuts on the peg. Medb came up and asked Fergus why he did not continue the advance, to which he replied: 'We are here because of the message on this hoop. It is writ by Cuchulainn and says: Come no further unless you have a man who can fashion a hoop like this with one hand out of one piece. Fergus, my friend, is excluded. C·chulainn was here, Medb, and I will continue no further until the druids decide on the meaning of this.'

Fergus gave the hoop to the druids, who studied it, and very agitatedly declaimed that the rule of war forbade the armies continuing until the message was carried out.
'If you ignore this challenge and carry onwards past this point not one man here will be safe from the fury of Cuchulainn, not even if locked in his own house', said Fergus.
Ailill replied 'I have no desire to lose even one man before the battle is joined properly. We will go back to the south and continue through the forest at Fid Duin.'

They retreated and went through the forest, and the armies cut down all the trees as they passed, so that the place is now called Slechta, the Hewn Place. That night they spent in Cuil Sibrille, now called Cenannos or Kells. As they prepared to make camp a snow came so that no food nor decent shelter could be got ready, and they passed a long and bitter night.

C·chulainn, who had spent the night with a woman (some say his wife, others say differently), woke up later that morning and when he went out he found the tracks of the passing army.
'I was foolish,' he said to Laeg. 'I have let an army through and gave no warning to Ulster.' Determined and angry at himself, he and Laeg made haste and eventually overtook the advancing force. He settled down at the ford at ┴th Gabhla and cut a massive tree-fork with one slice and set it deep in the waters of the ford so no chariot could pass that way. As he was finishing his task the four sons of Urard mac Anchinne came upon him. He cut off their heads and impaled them on the four points of the tree-fork. The chariot horses returned to the armies and the men there saw all the blood on the animals and thought there was a battle-force awaiting them at the river at ┴th Gabhla. A company of men were sent to inspect the place, but all they saw was the track-marks of one chariot, the four heads impaled of the tree-fork, and Ogam writing on the side of the fork.

When the army met up with the company at the river Medb could not recognise the heads and asked if they were of her people.
'They are," said Ailill, 'and the very best of them too. How could they have been killed so easily? And what does that blasted Ogam say now!'
One of the druids spoke out the writing: One man, using one hand, had placed this fork. None may pass therefore unless another man - again, not Fergus - could do likewise.
'Very well," said Ailill, 'we will not attempt this challenge yet, if at all, but the messages says nothing about removing the obstacle. I leave that to you, Fergus.'
Fergus broke fourteen chariots in the attempt to remove the embedded fork. Only whe he hitched up his own horse and chariot did he succeed in removing the fork from the riverbed.