In 1900, Queen Victoria visited Ireland for the fourth and last time at the age of 81. The visit was ostensibly to thank Irish soldiers for their service in the Boer War, but many at the time suspected it was an attempt to encourage Irish recruits for the British Army. See film footage of Queen Victoria's Visit to Dublin .

The fall of Parnell confirmed the paralysis of the Home Rule issue, which remained on ice until the Liberal government’s challenge to the power of the House of Lords’ in 1910 resulted in the reunited Irish party holding the balance of power again at Westminster. In this context Home Rule was back in active politics, and by 1912 a Home Rule bill was due to become law after three years . This upped the ante in the struggle about Ireland ’s future between Unionism and Nationalism. Irish Unionism, in its opposition to Home Rule, retained considerable British Conservative party support, and Liberals were faint supporters of their Irish allies.

The Land revolution had created a class of satisfied small proprietors, buying out their generally uneconomically viable holdings through British government-backed mortgages; a scheme designed to satisfy small farmer demands, rescue landlords from estates now said to be unrealisable assets, and assuage conservative fears about the ambiguous status of property ushered in by the Land Commission in its rent-setting phase. 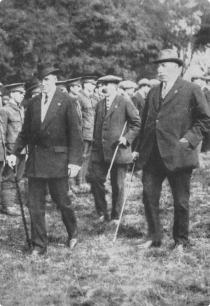 , southern Irish Unionist and protégé of Arthur Balfour, became leader with the northern industrialist James Craig of Ulster resistance, which moved from attempting to stop Home Rule for all-Ireland to protecting and maintaining within the United Kingdom such Ulster counties as seemed demographically feasible to see as having Unionist electoral majorities. Over the following years the projected area wavered between six, nine or four counties of the historic nine -county province of Ulster .
The cross-class alliance between the rural elite, the industrialised working class and the rural classes was cemented in Ulster through the Orange Order and, after a series of rallies proclaiming resistance to any Home Rule settlement, Ulster’s Solemn League and Covenant (see Film Footage of the Signing of the Covenant ) was signed by hundreds of thousands of men in September 1912, while similar numbers of Unionist women signed a similar document. Forming a paramilitary-style movement, the Ulster Volunteer Force, Ulster Unionists with British assistance imported arms through Germany to resist the upcoming Home Rule settlement. Groups arising out of the Dungannon Clubs, Cumann na nGaedheal and Sinn Fein set up the Irish Volunteers under the ostensible leadership of Eoin MacNeill, the Gaelic scholar and Gaelic League activist. Thus by 1913 Ireland was militarised into two competing camps, and appeared to many outside observers to be on the brink of civil war. The Curragh mutiny made it plain that the British army would not impose a Home Rule settlement, and the Conservative party under the leadership of Bonar Law indicated that they would support Ulster in any path it felt it necessary to take. Some form of dividing Ireland was on the cards.

The outbreak of what was expected to be a short war in August 1914 relieved Asquith from Irish fears. The UVF were incorporated with ease into the British army, and Redmond pledged the majority of the Irish Volunteers to the British war effort, as an indication of nationalist Irish support and goodwill on the eve of a Home Rule settlement, albeit one with a proto-partition style Home Rule Bill on the statute books. The Irish Volunteers –some 180,000 men, in the main followed Redmond , but a core minority under Eoin MacNeill and containing most of the pre-war advanced nationalist activists of the Irish Republican Brotherhood and Sinn Fein, remained at home and opposed Britain ’s war. See film footage of Irish Volunteers Joining Up.

In association with John Devoy and Irish- American groups, through Roger Casement’s mission to raise arms and men in Germany , the radicals planned a rebellion against British rule with outside support. The collapse of Casement’s mission in Germany , his capture by the Royal Irish Constabulary on Good Friday 1916, indicated that no realistic stand could be made through rebellion at this time. Eoin MacNeill countermanded an order for a rising on Easter Monday, but key activists lead by Thomas Clarke, Padraig Pearse and James Connolly defied his orders, seized the General Post Office and other key buildings in Dublin , and declared an Irish Republic . Knowing that their plans were known to the authorities, and feeling that no such attempt could be made again at that time, they proceeded despite Casement’s frantic attempts to get them to call it off.   See film footage of the 1916 Easter Rising. 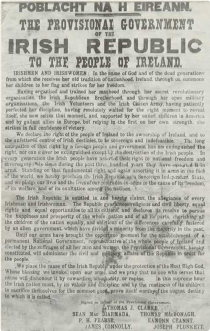 Proclamation of the Irish Republic

Proclamation of the Irish Republic

© Defence Forces.
Enlarge image
The text of the declaration of the republic which Pearse read was to be of critical importance in determining the nature of subsequent nationalist self-definition. The executions in Dublin of these so-called rebels and other popular young leaders like Sean MacDermott and Joseph Mary Plunkett swung public opinion against the British government. On 3 May Pearse, Clarke and MacDonagh were executed; on the following day Plunkett, Edward Daly, Michael O’ Hanrahan and Willie Pearse; on the 5 May Major John MacBride, estranged husband of Maud Gonne. Three days later Eamonn Ceannt, Michael Mallin and Sean Heuston were shot, and the executions ended with the deaths of James Connolly and Sean MacDermott on the 12 May. Roger Casement

Roger Casement was one of the founders of the Irish Volunteers in 1913. Following his mission to raise arms and troops in Germany, he was arrested by British forces in Co. Kerry in 1916 and brought to London where he was executed on 3 August 1916.

, the leading humanitarian defender of native peoples in the Congo and the Amazon basin in the first fifteen years of the century, was convicted of treason and hanged in Pentonville Prison on 3 August 1916. Passages that were alleged to be from his diaries, purporting to reveal homosexual practices, were circulated secretly by the British government at the highest level to stifle international demands for clemency in the light of his remarkable humanitarian record.

Full size image of the 'Proclamation of the Irish Republic'

In those same months of April and May 1916 thousands of Irish unionists and nationalists in British army uniforms died on the Western Front. The complex loyalties of the nationalists amongst them are partly expressed by Francis Ledwidge in his poem for his friend Thomas MacDonagh, and in Tom Kettle’s powerful prayer for his daughter.

The Asquith government, after the executions, tried in the early summer of 1916 to introduce immediate Home Rule for 26 counties, to shore up the Irish parliamentary party, who seemed potentially doomed otherwise. Despite the agreement of Carson and Joe Devlin and Redmond the plan failed, partly because Arthur Balfour failed in his honest endeavour to get Tory backbenchers to vote for it. Some Tory leaders like Balfour felt that they owed Redmond something, but they could see no way to deliver for him.

Prisoners interned as Sinn Fein suspects (as the Rising was erroneously labelled by Dublin Castle ) were released from camps in England in 1917, to soften the possibility of US entry into the War on the allied side. See film footage of the Return of the Suspects.  They soon organised into a newly constituted Sinn Fein and won six of seven crucial by-elections between 1917 and 1918. In the summer of 1917, Dublin Castle began a desultory harassment of realigned Sinn Fein and Volunteer supporters , banning meetings, prohibiting the wearing of uniforms and arresting leaders. In September 1917, one of these men- Thomas Ashe, died on hunger strike.

The prospect of the introduction of conscription in April 1918 united all of nationalist Ireland behind the emerging Sinn Fein, and in the December 1918 election Sinn Fein under the leadership of Eamon De Valera

won most of the nationalist seats outside Ulster . Withdrawing from Westminster, set themselves up in the Mansion House in Dublin as Dail Eireann, the parliament of the Irish Republic as declared in 1916. Thirty six of those elected for Sinn Fein were however in prison. Sinn Fein had been elected on a four-point programme: withdrawal from Westminster, ‘making use of any and every means available to render impotent the power of England to hold Ireland in subjugation by military force or otherwise’, the establishment of a native parliament, and an appeal to the post-war Paris Peace Conference ‘for the establishment of Ireland as an independent nation’.

Previous - The Fenians, Parnell and the Land War
Next - Revolution, Partition and Civil War