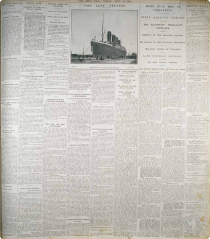 On the international front this decade was dominated by the lead-up to the First World War, and its duration from August 1914 to November 1918. About 49,000 Irishmen in the British Army died in the conflict. The Russian Revolution in 1917 had major consequences for the remainder of the century.

In Ireland the unionisation of the workforce marked the beginning of the decade, with the lockout of 1913 a major radicalising event. The coalition of more radical, nationalist and socialist elements led to the 1916 rising. The general election of 1918 saw Sinn Fķin win 73 of Ireland's 105 seats, Countess Markievicz of Sinn Fķin was the first woman elected to parliament, but she did not take her seat at Westminster. On 21 January 1919 the Sinn Fķin elected members formed Dßil ╔ireann and issued a Declaration of Independence, thus founding the new state. 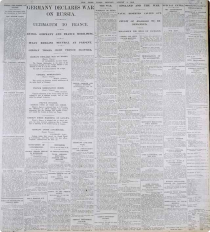 1918 (10 October) Dublin steam packet R.M.S. Leinster torpedoed by German submarine one hour out of Kingstown, 501 of the 771 on board died.

1918 (28 December) Countess Markievicz first woman elected to parliament, she refused to take her seat at Westminster.

1919 (21 January) Dßil ╔ireann assembled, issuing a Declaration of Independence, adopting a constitution for the Dßil, and issuing a message to the 'free nations of the world'.