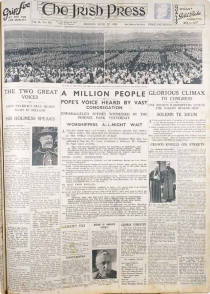 The decade of the 1930s was marked by depression worldwide, with unemployment and economic problems. As a result the decade witnessed the rise of Fascism and Communism. In 1933 the Nazis won power in Germany and Hitler became chancellor, in 1938 he annexed Austria. The Spanish Civil War (1936-1939) was followed by the outbreak of the Second World War in September 1939.

Ireland, too, had a depressed economy. The economic war with Britain from 1932 further depressed the Irish economy. The Irish government promoted a policy of protectionism and self-sufficiency, and attempts were made to start an industrialisation programme. Fianna Fįil first came to power in 1932 and remained in power until 1948. In 1937 a new constitution was formulated. Towards the end of the decade moves were made towards keeping Ireland neutral in upcoming war.

1939 (1 September) Outbreak of the Second World War. On 19 February Eamonn De Valera declares the aim of his government to preserve neutrality. Dįil and Senate meet to enact two bills which postulate neutrality, and a state of emergency is declared (2-3 Sept).

1939 (5 August) Inaugural flight of trans-atlantic service from Foynes to US.