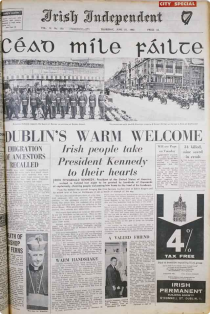 The decade of the 1960s was characterised by worldwide economic boom, the rise of population after the war, 'the Baby Boom', and the emergence of Civil Rights movements. Student movements came to prominence around the world, culminating in the events of 1968. It was the age of space exploration, in which the first man walked on the moon in 1969. In 1967 the first successful heart transplant was performed in South Africa by Dr Christian Barnard. The Prague Spring of 1968 saw an attempt to liberalise Communism in Czechoslovakia, crushed by Soviet forces. Dr Martin Luther King and Robert Kennedy were assassinated in the United States in 1968. The war in Vietnam dominated the decade, and gave rise to anti-war movements in the United States and Europe. The 'six-day' Arab-Israeli war, 1967, saw the overwhelming defeat of the combined Arab forces, and the occupation by Israel of the West Bank and Gaza.

Ireland also benefited from the economic boom and developing economy as policies of protectionism were abandoned and the country was opened up to international trade and industry. RTÉ television began on the last day of 1961. The 1960s also saw the end of censorship in Ireland, and the provision of free post-primary education. The Civil Rights movement began in the North of Ireland, and the start of the 'troubles', which continued to the end of the century.

1960 (27 July) battalion of Irish defence forces leaves for the Congo. On 8 November nine Irish soldiers killed in an ambush at Niemba by Baluba tribesmen.