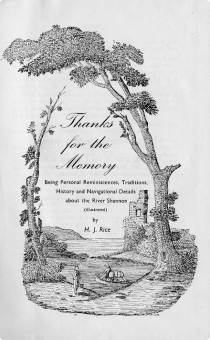 Thanks for the memory

Title page of Thanks for the Memory by H.J Rice covering personal reminiscences, traditions, history and Navigational details about the River Shannon. Published Athlone, 1952

Thanks for the memory

Title page of Thanks for the Memory by H.J Rice covering personal reminiscences, traditions, history and Navigational details about the River Shannon. Published Athlone, 1952

Just as the lakes have inspired artists so too have they inspired poets and writers.

Most writers who have left us accounts of Westmeath will have drawn attention to its abundant lakes and waterways.

From the ancient annals of Ireland and the first published account of the county recorded by Sir Henry Piers in 1682 there are references to the lakes both in an historical and geographical sense.

In the 19th century such writers as Thomas Cromwell; Gregory Greendrake [H.B. Code], John O'Donovan, John Keegan and Mary Banim all added to our knowledge of the lakes.

In the 20th century there were several classic books on the Shannon published all of which are generous in their coverage of Lough Ree. Perhaps the most significant of these is Harry Rice's 'Thanks for the Memory' first published in 1952 and reissued several times in the intervening years.

Several important articles by writers such as Leo Daly, Marian Keaney and Gearoid O'Brien have focussed on aspects of the Lakelands of Westmeath.

Westmeath had several bardic families, these and other early poets drew on the lakes for inspiration - among other things the metrical dindseanchus contains interestic versions of how our lakes got their names. 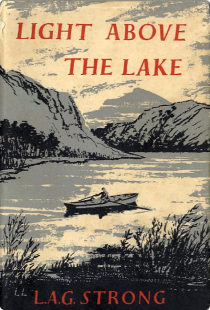 Jacket of Light above the Lake by L.A.G Strong.Jacket design by Lynton Lamb. Published London: Methuen, 1958.

Jacket of Light above the Lake by L.A.G Strong.Jacket design by Lynton Lamb. Published London: Methuen, 1958.

Other important modern poets who have written drawn on the Lakelands of Westmeath for inspiration include: Conleth Ellis, Desmond Egan and Vona Groarke.

Novelists such as Athlone's John Broderick have been greatly influenced by the local topography but an unusual Westmeath item is a novel written by the Irish novelist L.A.G. Strong which is called 'The Light Above the Lake'.

This book was inspired by a story told to Strong by Harry Rice the author of 'Thanks for the memory' . Rice, who was a retired British and Indian army doctor, had devised a system of communicating with his young wife across the waters of Lough Ree and Strong uses this as a basis for his book.

George Moore's novel 'The Lake' was inspired by the case of Fr Thomas Connellan a curate in St. Peter's parish, Athlone in Victorian times. The story of Fr Connellan has been well recorded by Leo Daly in 'James Joyce at the Cross Keys'