Because of the scenic beauty and its proximity to Mullingar, the county town of Westmeath, a large number of mansions were built. The builders tried to surpass one another in terms of magnificence of setting and grandeur of style. 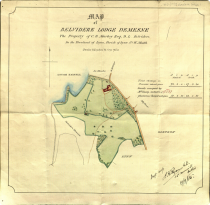 The most famous of the mansions or large houses situated on the shore of Lough Ennell is Belvedere House the former seat of the Earl of Belvedere.

The house designed by Richard Castle was originally intended to be a lake-side lodge for the fishing parties of Lord Belvedere.

Built in 1740 it is perhaps the earliest example of a bow-ended house in Ireland and is considered by many to be one of Richard Castle's finest creations.

Belvedere is notable for the collection of ruined Follies in the gardens. Of particular note is the Jealous Wall built by Robert Rochfort after a quarrel with his brother George.

At the time of its construction George lived in Rochfort House or Tudenham Park which was in sight of Belvedere. Other Follies of Belvedere are the Gothic Otagon and The Sham Rvin Gateway.

Of the other mansions and demesnes which once dotted the shoreline many now lie in ruins. The most impressive of the mansions is thought to have been Rochfort or Tudenham, the house of George Rochfort. The house was built around 1742 and was blocked from the view of Belvedere by a Folly called the Jealous Wall so called because Lord Belvedere was jealous of the size of the house compared to that of Belvedere House. It was sold in 1836 to Sir Francis Hopkins and shortly afterwards the name was changed from Rochfort to Tudenham Park. The House was used as a hospital in World War 1 and occupied by the military in World War 11. Following a long period the house was empty and it was gutted in the 1950's and is now a ruin. 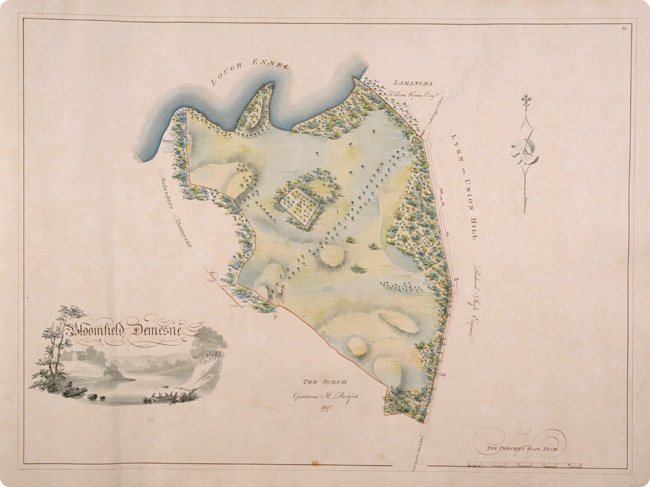 It was originally designed as a dower house for one of the daughters of the Belvedere family. The house has had a variety of functions having served as dower house, convent and school. It is now a high class hotel and leisure centre.

Ledistown House is also known as Ladestown. A late Georgian house was build in 1823 and incorporated an earlier 18th century house and a tower house. The House was the former seat of the Lyons Family. The House was once home to John Charles Lyons famous for his work with orchids which he grew in the glass houses of Ledistown. He also had a private printing press here on which he produced some of the rarest known books of Westmeath interest. While the house may now be derelict the stables remain in use and are home to a riding school.

Carrick House near Lough Ennell was a large house built in the mid 18th century by the Fetherston family (now a ruin).

Belmont House was built in 1860 and was a dower house to Ledistown House.

Dysart House and demesne lay on the western shore of the lake. Now however little remains of this house and the demesne has now been divided into farms.

Previous - Islands of Lough Ennell
Next - Sport and recreation