This is a photograph of the clapper bridge at Burlehinch near Louisburgh, one of the oldest bridges in Mayo. It is built in a style common in Devon and Cornwall. It was built at a low point of the river to enable pedestrians to cross.

This is a photograph of the clapper bridge at Burlehinch near Louisburgh, one of the oldest bridges in Mayo. It is built in a style common in Devon and Cornwall. It was built at a low point of the river to enable pedestrians to cross.

There are many old and interesting bridges in Mayo. One such is the Clapper Bridge, west of Louisburgh at Burlehinch near Killeen, thought to date from medieval times and possibly one of the oldest bridges in the

county. It was known locally as the Colony Bridge, after the Church of Ireland settlement in that area. Of similar construction to bridges found in Devon and Cornwall, this clapper bridge, built for pedestrians, was made at a place on the river where the water depth was generally low. It is the largest complete clapper bridge in Ireland, stretching 50 m (164 ft) across the river. Its 37 arches are superbly constructed in the primitive clapper style, each made of a clapper or flat limestone slab, about 0.6 m (2 ft) wide, resting on a pier of about 0.6 m (2 ft) above the river bed.

Photograph of Achill Sound before bridge was built

Photograph of Achill Sound before bridge was built

Up until the end of the 19th century, Achill Island remained separated rom the mainland even though the channel separating the two was quite narrow as can be seen from this photograph.

The high levels of seasonal migration and the importance of developing market towns emphasized the necessity for a permanent link across the narrow channel. Finance for a bridge was acquired through subscriptions collected by an interdenominational committee. A swing bridge, pivoting on one central pier, was officially opened by Michael Davitt, founder of the Land League, in 1887 andÝnamed after him. This bridge served adequately for 60 years, but then changes in modes of transport necessitated a wider roadway. This is very evident from the photograph here of a GSR bus crossing the bridge.

Photograph taken on occasion of official opening of the Michael Davitt bridge linking Achiil Island to the mainland, 1948. This bridge replaced the older swing bridge which was opened in 1887.

Photograph taken on occasion of official opening of the Michael Davitt bridge linking Achiil Island to the mainland, 1948. This bridge replaced the older swing bridge which was opened in 1887.

In 1947, the old bridge was abandoned and, the following year, a new bridge opened, again called the Michael Davitt Bridge, built alongside and south of the original bridge.

The new bridge was the largest bridge structure to be undertaken by an Irish construction company at the time, with J.C. McLoughlin of Pearse Street, Dublin, carrying out the work. Mayo County Council is responsible for maintaining the new bridge and employs local residents to operate the swing partition to ensure the safe passage of high-masted vessels passing underneath.

The seven-arched Burrishoole Bridge, crossing the Burrishoole channel, was built in the 18th century as part of the roadway between Newport and Mulranny. Then, in 1950, the road was re-routed along the former railwayÝline to the north, located further downstream. The railway line, which ran from Westport to Achill, had been in operation from the 1880s until 1939.

A bridge along its route carried trains over the Burrishoole channel and it was this bridge that was widened in 1950 to accommodate road traffic and replace the old Burrishoole Bridge route. By the 1990s, however, the high level of salt in the atmosphere had eroded the steel of the former railway bridge and, in 1998, Mayo County Council replaced the bridge's deck. While this work was being completed, road traffic was once again routed over the old Burrishoole Bridge.

Until the early 1980s, residents who lived on the far side of the Ugool Suspension Bridge near Bellacorrick were unable to bring their cars to their homes without taking a longer, alternative upstream route, which could only be crossed when the river was low. In 1982, Mayo County Council demolished the old suspension bridge and built a new Ugool Bridge, a single-lane fixed reinforced bridge. 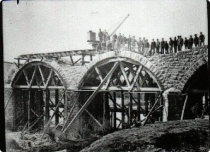 Photograph from around 1890, of Newport railway viaduct under construction. This was part of the Westport to Achill railway.

Photograph from around 1890, of Newport railway viaduct under construction. This was part of the Westport to Achill railway.

The town of Newport is on the Newport river, where it flows into the north-east corner of Clew Bay. At Newport the single line track crossed the river on a fine viaduct of red sandstone. It was built to the highest engineering and architectural specifications of the day and was completed in 1892 at a cost of over £7,000. The overall length of the viaduct is 305ft (92m) and the width 18ft 6in.Ý

The line was not opened until 1894 on completion of a nearby tunnel. It is still a resplendent feature on the Newport landscape today. A similar viaduct to that at Newport is located at Knockranny, also on the former Westport ñ Achill railway line.

Photograph of Ugool Suspension Bridge near Bellacorick, taken 1974. The bridge was demolished and replaced in 1982 with a bridge cpable of accommodating cars. Included in photograph are Councillor J.T. Barrett, Bangor, and local residents Tom Carolan and Martin McAndrew.

Photograph from around 1900 of railway viaduct, Newport, built as part of Westport-Achill railway line.