The first railway in Ireland, the Dublin-Kingstown railway was opened in 1834 and by 1853 there were 840 miles of railway open. However the expansion of the system into Mayo did not happen until 1861 when the Midland and Great Western Railway opened the line from Castlerea to Ballyhaunis. The MGWR was formed in the 1840s and was the third largest railway company in the country after the Great Southern and Western and the Great Northern. In 1925, it amalgamated with other railway companies to form the Great Southern Railway. Some 2,000 people were employed in bringing the railway to Ballyhaunis. Many of those who came to work on the construction made their homes in the county when the work was finished.

In May 1862 the line reached Claremorris and in December 1862 it was extended to Castlebar. There was a delay in development then, apparently due to financial difficulties so the Westport line did not open until 1866 with an extension to Westport Quay opened in 1874.

The northern extension from Manulla was begun with the opening of the line to Foxford in 1868. Ballina was reached in 1873 and an extension to Killala was opened in 1893.

The Waterford and Limerick Railway was responsible for another line which also headed north from Claremorris, making stops at Kiltimagh, Swinford and Charlestown, after which it continued on to Curry in Co. Sligo. 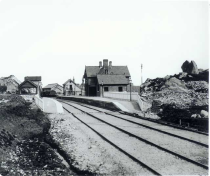 Photograph of Mulranny Railway Station which was part of the Westport-Achill railway line. this line was in service between 1894 and 1937.

Photograph of Mulranny Railway Station which was part of the Westport-Achill railway line. this line was in service between 1894 and 1937.

The first trains passed through Charlestown on 1 October 1895 and were welcomed by enthusiastic crowds. In 1892 the Claremorris to Ballinrobe line was opened by the independent company, Ballinrobe and Claremorris Light Railway. This company was absorbed by the Great Southern grouping in 1925.

The Westport line was extended to Achill Sound in the 1890s. and this was one of the so-called 'Balfour Lines', called after Arthur J. Balfour, Chief Secretary for Ireland during the years 1887-91, who introduced the Act providing State assistance for the construction of narrow gauge lines to disadvantaged areas. The first station on this extension was Newport which opened in February 1894, followed by Mallaranny, (Mulranny) in August of the same year. The line to Achill was completed in May 1895.

Individual towns prospered with the arrival of the railways. When Irish railway companies became involved in the hotel business, the luxury Mulranny Hotel opened in 1897. From 1898, a combined rail and hotel ticket was available. The hotel was equipped with every modern convenience of the time, including electric light, and by 1900 hot and cold water baths were also available. Patrons had access to sandy beaches and the use of the hotel's boats and golf links.

Photograph of NewportRailway Station which was part of the Westport-Achill railway line. this line was in service between 1894 and 1937.

Previous - Bridges
Next - The Achill Tragedies