In Mayo, roads began as simple paths and tracks created by people travelling continuously along the same route, sometimes laying down wood and plant materials to create a more permanent trackway. One such ancient routeway, the Tóchar Phádraig (Patrick's Causeway), pre-dates St. Patrick in the 5th century and is thought to have originated at Rath Cruachain in Co. Roscommon and continued as far as Croagh Patrick, outside Westport. Another route is the Bangor trail which stretches 28 miles from Newport, through the Nephin Beg mountains, to Bangor Erris. Despite such early routeways, Co. Mayo remained largely without a connecting transport system until the 18th century when each parish became responsible for the roads in its own area, resulting in a wide variation in standards and maintenance throughout the county. 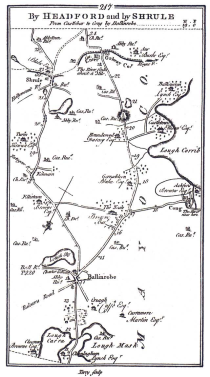 Detail from map of Castlebar-Ballinrobe road from "Maps of the Roads of Ireland" by George Taylor and Andrew Skinner, first published 1778.

Detail from map of Castlebar-Ballinrobe road from "Maps of the Roads of Ireland" by George Taylor and Andrew Skinner, first published 1778.

In 1777, George Taylor and Andrew Skinner carried out a survey of roads in Ireland and published the results in the book "Maps of the Roads of Ireland", which is available for reading in the local studies section of Mayo County Library. At this stage, the road system was expanding and the number of horses, both private and hired, were on the increase. The maps of Mayo roads show an impressive network of roads, although reports from travel writers at the time show a considerable variation in quality. Arthur Young recorded in 1776 that the road from Killala to Castlebar was 'vile and stony'. Some years later, James McParlan, who prepared a statistical survey of Co. Mayo for the Royal Dublin Society in 1801, reported that, overall, he found relatively good roads throughout Mayo.

In the early part of the 19th century road development was carried out which lessened the isolation of the remoter areas of the county to the northwest. Patrick Knight in his book "Erris in the Irish highlands and the Atlantic Railway" recorded that Alexander Nimmo, the renowned Scottish engineer, was sent from Dublin in 1822 to complete roads works, begun in 1819, to link Belmullet and Blacksod Point to the Castlebar road. A branch road was extended from Bangor to Tulloghan Ferry and a road was constructed from Ballycastle to Belderrig between 1822 and 1827. This was extended as far as Glenamoy in 1830 and subsequently to near Belmullet, opening a channel of communication along the north coastline to the Mullet Peninsula.

Nowadays we associate the development and maintenance of roads with County councils and the National Roads authority. Prior to the establishment of County Councils at the end of the 19th century, local responsibility for construction and repair of roads rested with the "Grand Juries". These were composed of landowners and their agents and they met twice a year. During these meetings "presentments" were voted, which allocated finance to various projects including roads, bridges and piers.

In the 19th century relief works were sometimes introduced by the authorities as a means of relieving distress among the population. These relief works included road construction and the results often became known as "Famine roads"

The establishment of Mayo County Council in 1898 coincided with the arrival of the motor car and the corresponding increased demand for an improved road system. Maintaining roads suitable for cars and other motorised machines, which was a central feature of the new Council's work, became increasingly expensive with the cost of road surface materials and machinery. The Council received funding from the 1909 Vehicle and Driver Taxation Act, introduced to provide funds for modernising and improving the road system.

Photograph of steam locomotive acquired by Mayo county council in 1924 and used in roadmaking. Restored by the council in the 1980s

Photograph of steam locomotive acquired by Mayo county council in 1924 and used in roadmaking. Restored by the council in the 1980s 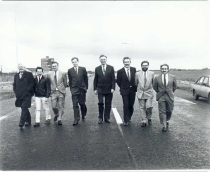 Photograph of Minister for the Environment Padraig Flynn, Mayo County Engineer Joe Beirne and other Council staff, taken on occasion of the opening of the N5 road between Castlebar and Swinford, 1991.

Photograph of Minister for the Environment Padraig Flynn, Mayo County Engineer Joe Beirne and other Council staff, taken on occasion of the opening of the N5 road between Castlebar and Swinford, 1991.

During the 20th century, the road system improved as resources again became available and infrastructure increasingly became a priority at local, national and European level. The Castlebar area in particular benefited considerably in the early 1990s with the improvements in the N5 road between Castlebar and Swinford and the construction of the Castlebar inner relief road.

Photograph of steam locomotive, nicknamed the Gráinne Ni Mháille, acquired by Mayo County Council in the 1920s and used in roadmaking. It was previously used to draw canons in World War 1.

Previous - The Achill Tragedies
Next - Modes of Transport