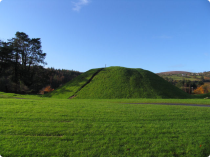 The Motte and Bailey at St. Mullins

This Motte and Bailey at St. Mullins dates from the Twelfth Century. It consists of a large flat-topped earthen mound, which is surrounded by a ditch or fosse. It also features a banked enclosure to one side.

The Motte and Bailey at St. Mullins

This Motte and Bailey at St. Mullins dates from the Twelfth Century. It consists of a large flat-topped earthen mound, which is surrounded by a ditch or fosse. It also features a banked enclosure to one side.

The village of St. Mullins is situated on the River Barrow between the Blackstairs mountains and Brandon Hill. Its prominence as an ancient site is documented in a number of important historical sources for County Carlow. St. Mullins was the site of an ancient monastery founded there by St. Moling in the seventh century. Samuel Grose described St. Mullins and its church in his famous illustrated work in two volumes, "The Antiquities of Ireland" which was published in 1791. In it he says that St. Mullin's (his spelling) is "a small village on the Barrow". He refers to its ancient name of Teighmolin or St. Mullin's House. He continues by noting some information about St. Moling's life. He mentions St. Mullins as a place "being, by the superstitious , held in the utmost veneration, from the supposed sanctity of its patron, St. Mullin".

Samuel Lewis in his "Topographical Dictionary of Ireland" published in 1837 writes that the ancient edifices occupy 'a beautiful situation on the eastern bank of the River Barrow'. He goes on to state that the remains consist of "five small plain structures in the churchyard". He also refers to " small stone cross and a small roofless building" and to the Holy Well enclosed by a stone wall round which the country people do penance. 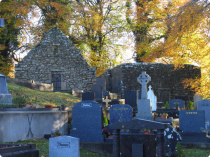 Graves at St. Mullins with church ruins in the background.

Graves at St. Mullins with church ruins in the background.

The Ordnance Survey Field Name Books for 1839, Volume III also describes St. Mullins and mentions St. Mullin's Church and graveyard and a corn mill. It distinguishes between these buildings and the antiquities which are listed as "St. Mullin's Monastery, Temple, Moat and Well and Cushlanmoyle castle". O'Donovan describes the St. Mullin's Abbey in some detail. He points out that it consists of "4 ruined churches or houses" and also states that Ryan (the Carlow historian John Ryan) erred when he mentioned that there were five such buildings. He points out that Ryan must have mistaken the old burial vault for part of a church. The pedestal of a stone cross and two pieces of the arms are also listed. The village of St. Mullins is described as having a few scattered houses which are 'all of stone'.

The Ordnance Survey Field Name Books include also a reference to the Holy Well. This latter is situated on the northern bank of the St. Moling's river which itself flows into the River Barrow at the northern side of the St. Moling's Abbey. The Holy Well is describes as being 'a large spring about 10 or 12 feet in diameter'. It is surrounded by a row of ash trees. It is situated on rising ground and is faced by 'an enclosure of masonry', about 10 foot long by 5 foot wide, without a roof. O'Donovan refers to the local custom of 'bathing children who are suffering from certain diseases' in this Holy Well.

The historian Rev. J.F.M. Ffrench wrote about St. Mullins in the Journal of the Royal Society of Antiquaries in 1892. He makes some interesting references to Saint Moling by stating that according to tradition St. Moling was a "skilled manager of a boat, getting into his light curragh and passing quickly up the river (the Barrow) to commune with his friend St. Laserian at Leighlin". He also gives a detailed account of the Holy Well and the significance of the surrounding ash trees and their "peculiarly sacred character".

In more recent times St Mullins and its antiquities are described in the "Archaeological Inventory of County Carlow" produced by the Archaeological Survey at the Office of Public Works in 1993. The County Carlow inventory is one of a series of similar County Archaeological Surveys. Short descriptions of the ancient remains including the round tower, stone cross, churches, holy well, motte and bailey and mill are included. The Holy Well is described as being "now dry". The stone cross is described in more detail than in the O.S. Books. As being a "solid-wheeled cross" with its "base and shaft decorated". The wheel of this cross shows a large figure of Christ. The church remains of St. Mullins include those of St. Mullin's Abbey with its chancel remains with "twin light window". Other church remains are also listed including those of St. James's chapel which is a "rectangular structure of roughly coursed granite rubble".

It is obvious from these references that St. Mullins was and continues to be an important ancient site which attracts many historians, archaeologists and general visitors to County Carlow and the River Barrow area.