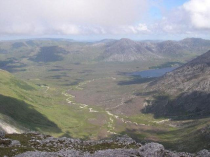 The landscape is mountainous - the Twelve Bens

This illustration shows the name and location of each of the Twelve Bens.

and the Mamturk mountain ranges dominate. Between the mountains lie stretches of blanket bog

Lowland blanket bog in Connemara. The Twelve Bens (the Twelve Pins) can be seen in the background.

The Shannon bounds the county on the east for about forty miles. Its tributary, the Suck, flows through Ballinasloe. The short Corrib River connects Lough Corrib to the sea.

Connemara Coastline
© Department of the Enviornment, Community and Local Government

The Galway coastline is highly indented with bays, inlets, peninsulas, islands and headlands. There are also numerous small sandy beaches.

© Department of the Enviornment, Community and Local Government

measures over 2000 km. There are a number of islands off the coast - 18 of them are still inhabited. 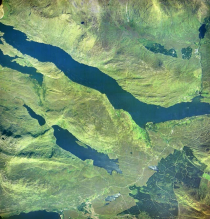 Killary Harbour forms a partial border between Galway and Mayo. It is Ireland's only fjord. It is sixteen km long and over 45 metres deep in some parts.