There are two third level colleges in Galway - University College Galway and Galway Institute of Technology. During term time the student population is about 25, 000. 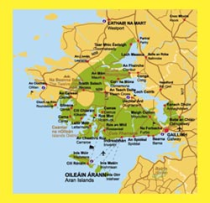 There are approximately 43,000 Irish speakers in Galway's Gaeltacht areas.

Irish is the first language in many parts of Connemara and on the Aran Islands.

Click on the image to see the Gaeltacht areas of Galway.