This unique book, also known as the Liber Antiquissimus, was compiled possibly at the instigation of mayor James Rice in the late 15th century and is an invaluable source of information about Waterford between 1361 and 1650, ending abruptly when Waterford was captured by the Cromwellian army. First official use of the English language in Ireland, it consists of 233 leaves of vellum bound in leather-covered oak boards. The contents are as follows: about 30 miscellaneous records dating between c.1199 and 1632; statutes passed by Waterford Corporation between 1366 & 1525, and some judgments made against people who had breached them, together with an account of certain 'ancient customs' of the city ratified in 1574; annual entries for the years 1526 to 1649, giving the names of the mayor and bailiffs or sheriffs, admissions of freemen, and the texts of statutes passed in that year; a rental of Corporation property for the year 1599-1600; and a list of leases granted by the Corporation 1366-1551.

The list of mayors and sheriffs and the statutes are of particular value and provide vivid and fascinating detail of the life of medieval Waterford and its citizens.

A law in 1382 states that ...'al hoggs, soues, bores, and al other swyne and piggs that sholde be founde by day or nyght walkyng within the saide citie … shal be slayne and killed by thos or by others that bene specially deputid unto the said office.'

A law of 1475 states that ...'no manere man, woman or childe putte no manere dunge, ramell or fylth into the ryvere over no key nor slippe of the citie, ne into Saynte Mary strete, nether into the Kyngs ditches nor beside them from the marckette crosse unto Arondelis gate, the fine being 4d.

In 1430 ...'no preste [priest] sholde have no wif or concubyne within the citie, and if they may be founde, the fynders shal have al ther clothes and thar bodies to the jayle of the said citie unto tyme thei shal mak a fyne.'

A statute of 1566 criticises publicans ...'little weighing the fear of God, do sometimes for better utterance of their wines retain naughty corrupt women, by whose procurement and means other honest damsels are often driven to folly, to the great offence of God and dishonesty of the whole city.'

The names to dominate city politics between 1526 and 1649 are Walsh and Sherlock with 47 instances of either a mayor or bailiff each, Wyse and Lombard being the next dominant and then White, Strange, Madan, Comerford, Dobbyn and Lincoln. Several of the pages are beautifully decorated with the pages for the 1630s being remarkably imaginative; the most ornate entry is that for 1566, the page displayed in the Museum. 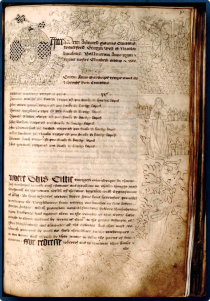