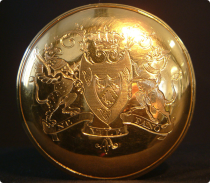 The certificate of honorary freedom of the city of Waterford was presented in this box to John Fane (1759-1841), 10th Earl of Westmorland, who was appointed Lord Lieutenant of Ireland in January 1790. The hallmarks and maker's mark reveal that it was made of 22 carat gold by Alexander Tickell (sometimes Ticknell) in Dublin in 1790. The lid is engraved with the coat of arms and motto (bring nothing vile to the altar) of the Fane family and the base is engraved with the arms of Waterford city with its motto Urbs intacta manet Waterfordia, the city of Waterford remains untaken.

The granting of freedom dates in Waterford from Norman times. If the recipient was important enough the certificate of freedom was presented in a gold or silver box. Lords lieutenant invariably received a gold box. In 1686 and 1745 and then frequently up to about 1820 the lord's lieutenant received the freedom of Waterford.