This fine little object is one of two 13th century money-boxes found in the excavations of Waterford city centre. It is of Waterford ware which probably began production in that century. Jugs, dripping/baking dishes, an ointment jar and unglazed cooking pots were found of the same ware; the clay contained mica and little bits of this and quartz crystals are visible on the surface.

The glaze is lead with varying amounts of copper, giving a green to black range of colours. This object has a lustrous deep purple-black sheen and was made on a potter's wheel. Although complete, it consists of two pieces, probably broken to get the coins out. Similar glazed wares were found in Jerpointchurch townland, Co. Kilkenny. A range of pottery made in Waterford today has been inspired by this ware. 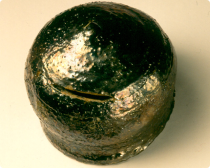