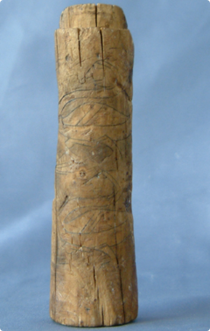 The knife was probably the most common tool in early medieval times, used by man, woman and child, probably made by its owner and carried from the belt. Ten wooden handles were found in the excavations of Waterford, probably for knives. One handle has a metal blade intact, another a wooden blade. Most of the handles are made of yew, a strong elastic wood. This object, half of which survives, is of unidentified wood and is beautifully decorated. The design is incised not carved. At the bottom is a panel of diamond lozenges and above are two anthropomorphic figures set one above the other forming a pattern. The figure has a human head with a pointed hat set on a long swan-like neck which connects to a bird's body, the wings being suggested by diagonal parallel lines.

The body of the human/animal rests on a definite leg and foot. A similar design has been found on a 14th century ewer from Paris done in enamel. The wood is charred where the heated metal blade was deeply inserted.