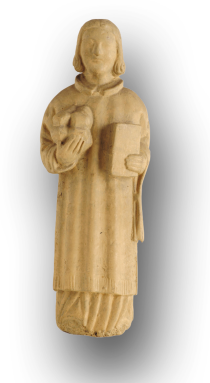 This is one of a group of eight statues - the largest single collection of medieval statuary in Ireland - which came to be housed in the chapel of the Holy Ghost Hospital almshouse and thereby survived the fate of many religious objects in the 17th century.

The Hospital, founded in 1545, occupied the chapel of the former Franciscan friary - known as Greyfriars from the habit colour of the monks - which ministered to the poor of Waterford from 1240 to its closing down by order of King Henry VIII in 1540. Catholic service continued in the Hospital until 1815. The Holy Ghost Hospital still survives today but on a different site.

This wooden statue of St. Stephen is probably local work and was probably originally in the church of St. Stephen's leper hospital founded by King John in the early 13th century.

Previous - The Russell Chalice
Next - Tools