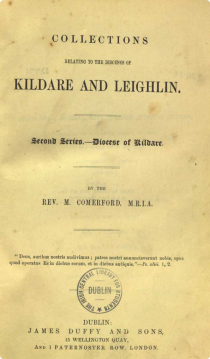 Collections relating to the Dioceses of Kildare And Leighlin is a multi-volume work published in 1883 that contains a history of the diocese from early Christian times in Ireland right up to the mid to late 19th century.  The history of the diocese spanned fourteen hundred years from the time of St. Conlaeth and St. Laserian, reputedly the founders of Christian community in the region, to their successor the Right Rev. James Walshe. Bishop Walshe served as bishop of the diocese from 1856 to 1888.

Between the late 18th century and Catholic Emancipation in 1829, the Penal Laws were gradually dismantled removing restrictions on Roman Catholicism in Britain and Ireland . A symbol of this more tolerant attitude was  the establishment of St. Patrick's College, Maynooth. The intention of the college was to provide education for Catholic priests in Ireland , who before the Act went to the continent for their training. This reduced of the number of radicalised priests returning from revolutionary France and hindered potential revolution. In return a grateful Irish Catholic Church condemned the 1798 rebellion and supported the 1800 Act of Union.

Most clergy were bitterly opposed to the growing influence of republicans who espoused political violence and secularism though individual clergymen were sympathetic. For many Irish people, Roman Catholicism and their Irish identity became interchangeable. In the wake of the Irish Famine of the 1840s, the Irish poor took comfort in the same faith that had seen their ancestors through religious persecution.

At the time Rev. Comerford compiled his collection, Irish Catholicism was growing in political power and Anglo-Irish Protestant hegemony was beginning to crumble due to pressure from the Land League. Meanwhile the end of the Union and the introduction of Irish Home Rule also appeared imminent. However Irish independence was not achieved until 1922 and in the new Irish Free State the Catholic dioceses like Kildare and Leighlin played a major role especially in education, caring for the sick and the poor and its conservative influence over social norms and morality.

Previous - Cogan: The Diocese of Meath
Next - D'Alton: History of the Archdiocese of Tuam