Walsh: Fingal and its Churches 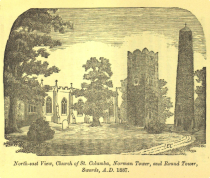 Fingal And Its Churches by Robert Walsh was published in 1888. Fingal is an area of north Dublin that extends from the River Tolka in the south to the River Devlin in the north. It included the three Rural Deaneries of Finglas, Swords and Garristown and four baronies of Coolock, Nethercross, Balrothry East and Balrothery West with a small tract to the east of the barony of Castleknock. Walsh describes the history of its churches since the earliest Christian era.

Fingal has many monasteries, churches and towers. One of the best examples is the 6th century Lusk Round Towers with an ajacent tower house that dates from the 16th century. In the grounds of the Church of Ireland in Swords, the Swords Round Tower is all that remains of an early Christian monastic settlement. At Kinsealy, St. Doulagh's Church is built on the site of a monastic settlement dating from the 7th century founded by St. Doulagh.

From the time of St. Patrick, Christian communities thrived in the area until the arrival of the Vikings when they came under increasing attack. The round towers are believed to have been bell towers and also used as places of refuge from the pagan raiders and also from the Gaelic Irish who also were guilty of plunder. After the invasion of the Normans, Fingal was part of an area known as the Pale where English laws, customs and language became predominant. Beyond the Pale the Gaelic Irish were nominally English subjects and often attacked or levied taxes on the inhabitants of Fingal. The Normans influenced the arrival of European religious orders and were responsible for impressive church architecture.

Following the English Reformation, the churches of Fingal were administered by the Anglican faith while the Catholic Church was suppressed. During much of the 17th and 18th centuries the Penal Laws persecuted Catholics while an Anglican Anglo-Irish Ascendancy flourished. The Anglican parishes of Fingal received revenue from tithe collections which were imposed on all the inhabitants regardless of faith.

The Penal Laws were gradually repealed from the late 18th century onward. The Anglican Church was disestablished and the tithes system was abolished in Ireland in the late 19th century. Following Catholic Emancipations in 1829 the Catholic Church began a program of building its own churches in the Fingal area and likewise throughout the country.

Previous - O'Connell: Diocese of Kilmore
Next - Wight: Rise and Progress of the People called Quakers