Eucharistic Congress Souvenir and Record from 1932 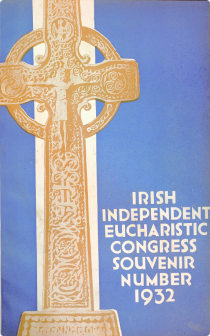 Between the 21st and the 26th June 1932, the 31st International Eucharistic Congress took place in Ireland. The main ceremonies and events were celebrated in Dublin, however smaller ceremonies and Eucharistic processions took place in towns throughout the country. On the final day of the Congress, approximately one million people are believed to have attended an outdoor mass in the Phoenix Park in Dublin.

In this souvenir publication from 1932, the Irish Independent gives a review of the Catholic faith in Ireland at the time. It also includes a programme of events and a history of the Eucharistic Congress as well as articles on Irish clergy and religious orders, foreign missions, St. Patrick and religious buildings and relics.