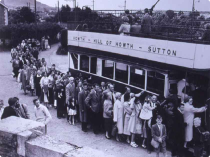 Hill of Howth Tramways ran tramcars from Sutton to Howth via the Summit. This line opened in 1901.

Hill of Howth Tramways ran tramcars from Sutton to Howth via the Summit. This line opened in 1901.

The Dublin Southern District Tramways Company opened two routes in 1879: a 4' 0" (1.22m) gauge line from Kingstown to Dalkey (4' 0" gauge) in March, and Haddington Road-Blackrock (5' 3" gauge) in July. The intervening gap was bridged in 1885 by the 5' 3" Blackrock and Kingstown Company. The Imperial Tramways Group, which controlled the Southern Company, acquired the B & K in 1892 and the entire line from Haddington Road to Dalkey was rebuilt to the 5' 3" gauge, giving Dublin its first electric tram service, commencing on 16th May 1896.

The Dublin Southern District was bought out by the Dublin United in September 1896, which then became the D.U.T.C. (1896) Ltd. The D.U.T.C. immediately began electrification and extension of its system, the first electrics reaching Nelson Pillar from Clontarf on 19th March 1898. The changeover was expedited by the opening of the Ringsend generating station in autumn 1898. The entire system was converted by January 1900, except for the line from Haddington Road to Sandymount, on which the last horse tram ran on 13th January 1901. Because of the low bridge at Bath Avenue, this route necessitated single-deck electric cars. Several extensions were made to the system over the next few years. The most notable were: Sandymount via Ringsend (March 1901), Ballybough (October 1900), the Whitehall extension (September 1903), Dartry (January 1905), Rialto (May 1905) and Lower Baggot Street (1906).

Apart from those of the D.U.T.C., three other electric tramways opened in the Dublin area at the beginning of the twentieth century. The 7-mile Lucan line from Conyngham Road was reborn as the Dublin and Lucan Electric Railway, changing its gauge to 3' 6" (1.07m) and opening in March 1900. The Clontarf and Hill of Howth Tramroad Company inaugurated a route, six miles long, between the D.U.T.C.'s Dollymount terminus and East Pier, Howth, in July 1900. By 1907, this line was effectively part of the D.U.T.C. system. In June 1901, the Great Northern Railway opened the first section of the Hill of Howth Tramway from Sutton to the Summit, and from there to Howth in August. A feature of all the three lines described was the introduction of eight-wheel (bogie) tramcars.

The first D.U.T.C. tram with extended upper deck and windscreens (No. 191) appeared in 1899. Subsequent new trams had these features, which were also applied to older vehicles on overhaul. The process, known as 'vestibuling', was one of the features that gave D.U.T.C. trams their unique appearance. From 1903, D.U.T.C. trams displayed coloured symbols to distinguish the various services and bogie cars, introduced on the Dalkey line from 1906 onwards, made the D.U.T.C.'s name a byword for excellence throughout the tramway world. The livery of the Dublin trams was blue and ivory, elaborately lined out.

Before World War One, express trams ran on the Dalkey and Howth lines each morning and evening, ordinary stopping cars changing track at designated places while the expresses passed. On the Dalkey line, the expresses ran non-stop between Merrion Square and Blackrock. Among other facilities offered by the D.U.T.C. was the Parcels Express, which operated from 1883 to 1940, and a tramway freight service from 1909 to 1927. Dublin Corporation also used the tramways to move refuse trains from Stanley Street to Fairview between 1907 and 1927.