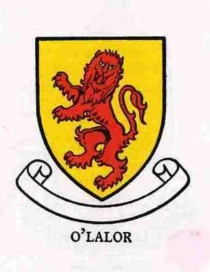 This name in modern times is spelled in three different ways - Lawlor, Lalor, Lawler: the first of these being slightly more numerous than the others. In Irish it is Ó Leathlobhair, which would appear to denote "descendant of the half-leper," which is no doubt a nickname arising from some physical defect and not to be taken literally. The prefix Ó, it may be noted, which was discarded during the period of Gaelic sub­mergence, has not been resumed in modern times. The O'Lalors, like their kinsmen the O'Moores, were one of the Seven Septs of Laois. They were located near the famous Rock of Dunamase in Co. Laois, but were driven from this territory by the English invaders under Queen Elizabeth I.

The scene of the making of the treaty, as a result of which the leading men of the Seven Septs were transplanted to Co. Kerry in 1609, is still called Lalor's Mills.

The peasants and workers of the O'Lalor sept remained in their old territory, a fact which is borne out by the prevalence of the name there today. Nearly all the Lalors, Lawlors and Lawlers in Ireland are to be found in Leinster, either in Laois or in the counties lying to the east of it. The name of one Harry Lalor is traditionally preserved as the hero of the massacre of Mullagh-mast in 1577 in which many innocent and unsuspecting Lalors, O'Moores and other inhabitants of Laois were treacherously done to death by the O'Dempseys in con­junction with the English planters of the district. The fall of the O'Dempseys as a great family was, according to John O'Donovan, locally attributed to this disgraceful event. Rev. James O'Lalor (or Lawler), a Co. Kilkenny Parish Priest, wrote in 1764 a notable elegy in Irish on one of the Kavanaghs, which was published by John O'Donovan some 90 years later.

The editor, in his introduction, mentions several distinguished Lalors, all of Laois or Kilkenny. He does not, however, refer to the most remarkable man of the name, the revolutionary James Fintan Lalor (1807-1849), son of Patrick Lalor a strong Laois farmer and sometime M.P. for that county. His brother Peter Lalor (1823-1889), led the insurgent miners at Eureka, Australia in 1854 and subsequently became a minister and speaker of the Legislative Council of Victoria. John Lawlor (1820-1901), the sculptor, is remembered by his statues in London, Cork and Limerick. Alice Lalor (1766-1846), better known as Mother Teresa, was a prominent figure in the religious life of America.