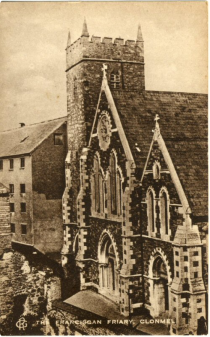 The façade of Clonmel's Franciscan Friary

The façade of Clonmel's Franciscan Friary

It was the Mayor of Clonmel, Otto de Grandison, who invited the Franciscans to the town, and the construction of their Friary can be traced to 1269. What is unusual about the site of the Friary, and the buildings that at one time were part of it, is the fact that it was placed inside the town walls, this at a time when abbeys tended to be located outside of towns.

The present structure was renovated in 1884, but one part of the Friary, the Tower, still survives from the original 13th Century structure. Today's church was once the choir of the building, with the nave stretching west, across today's Abbey Street and into the car park opposite the modern entrance. The remains of the nave were demolished when the Street was built in 1760. The cloister and domestic buildings were placed to the south, at the river side of the Friary. These were destroyed when Cromwell built a fort on the site.

A Change in Tenancy

The Friary was dissolved in 1540, and became the property of the 9th Earl of Ormond, but some of the friars remained in the town. The beginning of the 18th Century saw the Friary come under the control of the Unitarians. When they left the building, almost 100 years later, it was again acquired by the friars, who, following alterations, re-opened it in 1828.

In 1884 Walter G. Doolin gave the church its modern form, and followed the design of the Norman architects who originally built the Friary. The most obvious and easily recognisable feature of this style are the tall lancet windows and the large, circular, quatrefoil windows over the entrance.

Previous - The Church of Old St. Mary's
Next - The West Gate