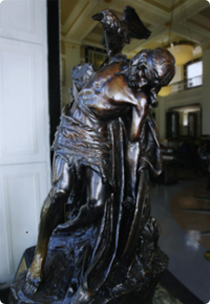 Often referred to as ‘The Wee County’, Louth is the smallest county in Ireland. It is steeped in Irish folklore and legend, and is associated with the mythical warrior of the epic Táin Bó Cualigne (Cattle Raid of Cooley), Cúchulainn. Indeed the motto of Dundalk, the County Town, reads “Mé do rug Cú Chulainn Cróga”, which translates to “I gave birth to Brave Cú Chulainn”. Louth is also well known for the old religious settlements of Monasterboice and Mellifont Abbey, as well as the site of the Battle of the Boyne.

Trekkers from nearby Ravensdale Lodge make their way through Cadgers Pass, Annaverna in the Cooley Mountains with Dundalk Bay in the background.

Trekkers from nearby Ravensdale Lodge make their way through Cadgers Pass, Annaverna in the Cooley Mountains with Dundalk Bay in the background.

Co. Louth takes its name from the small village of Louth situated in the heart of the county. Ultimately however, the name is derived from the Celtic pagan god Lugh whose festival Lúnasa was celebrated in August to mark the beginning of the harvest season.

Although Louth is a small county, a number of important wildlife habitats lie within its borders. From the mountainous Cooley Peninsula to the north, across the broad central lowlands of hedgerows and farmland, to the Boyne Valley in the south and the extensive coastline to the east, Louth’s patchwork of habitats supports a wide range of plant and animals species.