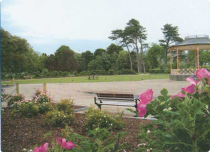 Aerial View of the People's Park

Aerial View of the People's Park

Waterford was originally a viking settlement, and is known in Irish as Port Láirge. Located in the South-East of Ireland and is part of the province of Munster. The city is situated at the head of Waterford Harbour. It is the fifth most populous city in the Republic of Ireland, and the oldest. According to the 2016 census Waterford City has a population of 53,504 people. See a map of Waterford city on the visitwaterford.com website.