Ware: The Antiquities and History of Ireland 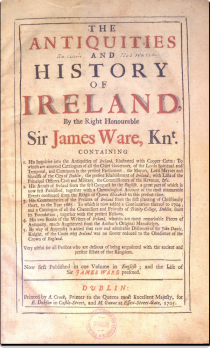 The Antiquities and History of IrelandÝwas writtenÝby Sir James Ware (1594-1666) a prominent 17th century IrishÝhistorian.ÝWare was a prolific writer, editor, translator, publisher and an important pioneer in the field of modernÝIrish historical scholarship.

Ware was born in 1594Ýon Castle Street, Dublin, close to Dublin Castle, the centre of British administration in Ireland. He was the son of James Ware who arrived in Ireland in 1588 to take up his post as secretary to the Lord Deputy of Ireland Lord Fitzwilliam. His father was made a knight by James I the first Stuart monarch and the first ruler of the three kingdoms of England, Scotland and Ireland. The elder James Ware was elected MP for Mallow in 1613 and held the post of auditor-general for Ireland until he died in 1632.

The younger James Ware, therefore enjoyed a privileged upbringing andÝwas educated at Trinity College, Dublin in Latin and Greek. He became especially interested in Irish history collecting Irish manuscripts and translated works in the collection of his friend, James Ussher, the Bishop of Meath.

Ware followed his father into politics, was knighted in 1629 and elected to Parliament in 1634 representing the University of Dublin. In the 1630s he also edited the works of Edmund Spenser, Meredith Hanmer and Edmund Campion. After his the publication of own work De Scriptoribus Hiberniae, he would not publish any works for many years due to his participation in the violent political upheavals of the next two decades in Britain and Ireland.

Following the defeat of the nativeÝGaelic Irish at Kinsale in 1603, the Earls of Tyrconnell and Tyrone fled for the European continent, opening the path for Scottish and English ProtestantÝsettlers to arrive in their thousands in Ulster encouraged by James I. The Gaelic Irish rebelled in 1641 during the reign of Charles I, his son and successor, followed by the massacre of Protestant settlers. The rebellion led to a complex civil war between Gaelic Irish and Old English Catholics, Royalist Protestants, Parliamentarians and Scottish Covenanters in the three kingdoms of the realm.

During this period, Sir James Ware was a staunch supporter of James Butler, 1st Duke of Ormond, a leading figure in the Catholic ConfederacyÝbased inÝKilkenny who for a time ruled two-thirds of the island of Ireland. As battle ebbed and flowed, Ware was imprisoned in the Tower of London, taken hostage in Dublin and spent periods of exile in England and France. After massive loss of life across the British IslesÝdue toÝwar, famine and disease and the execution of the Charles I, Oliver Cromwell emerged victorious as Lord Protector of the British Commonwealth .

After Cromwell's death in 1658 his son Richard succeeded him but was soon deposedÝafterÝa military coup. The British monarchy was restored in 1660 under the reign of Charles II who relaxed many of the discriminatory laws introduced against the Catholic Irish and Royalists. Ware returned to live on Castle Street, was re-elected to his Dublin University parliamentary seatÝandÝcontinued to be consultedÝby the Duke of Ormond.

Sir JamesÝWare also returned to his career as a writer, editor and historian. Toward the end of his life works such as Venerabilis Bedae Epistolae Duae, Rerum Hibernicarum Annales ab Anno Domini 1485 ad Anum 1558ÝandÝPrasesulibus Hiberniae Commentarius were produced. He collaborated his friend and fellow Dubhaltach MacFhirbhisigh.ÝSir James WareÝdied in 1666 aged seventy-two and was buried at St. Werburgh's Church, Dublin.

Previous - Thackeray: The Irish Sketch Book
Next - Warner: The History of the Rebellion and Civil-War in Ireland