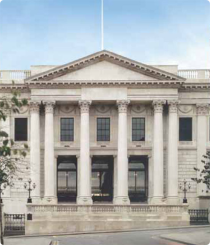 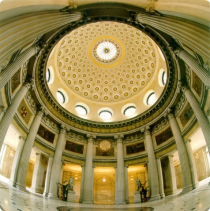 Image of the interior of Dublin City Hall showing the dome which is supported by 12 columns.

Image of the interior of Dublin City Hall showing the dome which is supported by 12 columns.

In the year 1761, the Merchants of Dublin formed themselves into a society, the objects of which were "the defence of trade against any illegal imposition and the solicitation of such laws as might seem beneficial to it". Seven years later in 1768, the society advertised an architectural competition for the design of a new exchange building to be erected on a site at Cork Hill, previously occupied by the church of Sainte Marie del Dame. The competition attracted a total of 61 entries and was won by the architect, Thomas Cooley, with a design preferred to the entry submitted by his more illustrious contemporary, James Gandon, who was later to design Dublin's Four Courts building and the Custom House. Construction began in 1769 and the new exchange was completed ten years later in 1779.

The Royal Exchange, or City Hall as it is now known, is without doubt one of Dublin's finest and most sophisticated 18th century buildings and marks the introduction to Ireland of the European neo-classical style of architecture.

Sir John Gilbert, in his History of the City of Dublin, records a contemporary description of the new building: "The inside of this edifice possesses beauties that cannot be clearly expressed by words, being a great curiosity to those who have a taste for Architecture. The dome is spacious, lofty and noble, and is supported by twelve composite columns, which, rising from the floor, form a circular walk in the centre of the ambulatory; the entablature over the columns is enriched in the most splendid manner, and above that are twelve elegant circular windows. The ceiling of the dome is decorated with stucco ornaments in the Mosaic taste, divided into small hexagonal compartments and in the centre is a large window that lights most of the building. Between two of the columns, opposite the entrance of the north front, on a white marble pedestal, is a statue in brass of his present Majesty George III. On each side of the fluted columns that support the dome are semi-pilasters of the Ionic order that extend to upwards of half the height of the columns; over the pilaster is an entablature; and above that, in the space between the columns, are elegant festoons of drapery and other ornamental decorations. At each extremity of the north side of the Exchange, are oval geometrical staircases, which lead to the coffee-room." It is worthy of note that the interior stucco work to which Gilbert refers was executed by Alderman Charles Thorp, later to become Lord Mayor of Dublin.

In 1852, Dublin Corporation acquired the Royal Exchange as its new headquarters and embarked on a series of alterations designed to create much needed office space. The changes included the building of partitions around the ambulatory, the construction of a new staircase leading from the rotunda to the upper floors and the addition of a number of windows overlooking Dublin Castle to the rear. The old coffee-room of the Royal Exchange was fitted out as a council chamber and the first meeting of the Corporation in its new headquarters, attended by the Lord Mayor, John D'Arcy esquire, took place there on Thursday 30th September 1852. Amongst other business, a motion was carried at the meeting, which decreed "that this building for the future be denominated the City Hall."

In 1814, before Dublin Corporation had taken over the building, the balustrade at the front of the building collapsed, killing a number of people in a crowd gathered outside to witness the whipping of a criminal. An iron railing, which was afterwards deemed to be unsightly, was erected in its place, but it was not until 1866 that the Corporation accepted a design by the architect Thomas Turner for a replacement stone balustrade, more in keeping with the original. One year later, The Irish Builder commented "We would be simply doing injustice in the present instance if we are not to accord our praise to the Municipal Council of the Corporation of Dublin for the restoration, or rather modification, of Cooley's original design for the balustrade which stood until the year 1814 in front of this building...they appear to us to be highly creditable both to the architect and contractor".

Image of the exterior of Dublin City Hall at night

Image of the exterior of Dublin City Hall at night

The present mosaic floor, featuring the City Coat of Arms, was installed in 1898 to a design by the City Architect Charles J. McCarthy and the magnificent frescoes depicting scenes from the history of the city which decorate the dome were executed between 1914 - 1919 by James Ward of the Metropolitan School of Art. Unfortunately, the original frescoes faded as a result of being painted directly onto the stone surface and were later repainted.

The last major structural alteration to City Hall, prior to the present restoration, was carried out in 1926 when the woodwork supporting the dome was replaced by a new steel structure designed by the then Assistant City Architect, Mr Conor McGinley.

City Hall was the hub of Dublin's civic administration from 1852 until early in 1995 when the Corporation moved its headquarters to the newly completed Civic Offices at Wood Quay. City Hall is still however the focal point for Dublin City Council's elected members who meet in plenary session on the first Monday of each month in the historic Council Chamber. The Lord Mayor of Dublin presides at meetings of the City Council, which the public may attend by prior arrangement and the various committees of the City Council meet almost every day in the Member's Room to make decisions affecting all aspects of civic administration.

In recent years, the process of conserving the architectural fabric of Dublin's historic heart has been embarked upon. The restoration of City Hall was begun in 1998 as part of this process of regeneration and the building now takes pride of place amongst a number of civic and cultural developments for which Dublin City Council has been responsible in recent times.

The redevelopment of City Hall was influenced by three main considerations; the enhancement of City Hall as a pre-eminent building of civic, historic and architectural significance; the reflection of its standing as the meeting place of Dublin City Council and the realisation of its potential as a major cultural and tourist attraction. As far as possible, City Hall has now been returned to its original configuration, with the removal of partitioning on the ground floor and in the vaults. These changes have had a striking impact on the Rotunda or circular entrance hall which has been opened up, allowing visitors to appreciate for the first time since 1852, the wonderful natural light which plays around the internal columns. The Portland stone fabric of the building, both inside and outside has been carefully cleaned, revealing the full beauty of the carved capitals, which were originally sculpted by Simon Vierpyl.

The first floor rooms of City Hall, most of which were created by Thomas Cooley, have been left almost unchanged, but the vaults at the lower ground floor level have been restructured to accommodate the multi media exhibition, Dublin's City Hall: The Story of the Capital, which outlines the first millennium of the city's history.

City Hall, in all its restored splendour, is central to Dublin's civic governance, and in this magnificent building, Dublin City Council has placed in trust a priceless treasure for future generations further signalling its commitment to valuing and preserving the great cultural heritage of the nation's capital city.