The Cork Camera Club was founded in 1923 by Alec Day (1902-1980), a well known Cork businessman and a keen amateur photographer and antiquarian. Day inherited his love for photography from his father William (1874-1965) and grandfather Robert (1836-1914). The Day family ran a saddlery business and sports shop in Cork for many years. Other members of the Cork Camera Club included the noted local historian C.J.F. MacCarthy; Aidan McSweeney, who owned a photographic equipment and supplies shop in Cork; and the filmmaker Arthur Ward. Many of the members were also members of the Cork Historical & Archaeological Society and the Cork Literary & Scientific Society.

Most of the photographs from the Cork Camera Club on this site show historic buildings and streetscapes. Photographs of people are remarkable by their absence. This is not typical of the photographs taken by members of the Day family, which often show streets crowded with people, and reflects the selection of photographs donated to Cork City Library by the Cork Camera Club. A recently-published book, Forgotten Cork (Collins Press, 2004), compiled by Colin Rynne and Billy Wigham, draws on a much wider selection of photographs from the Day collection, and includes many photographs of people going about their business in Cork. 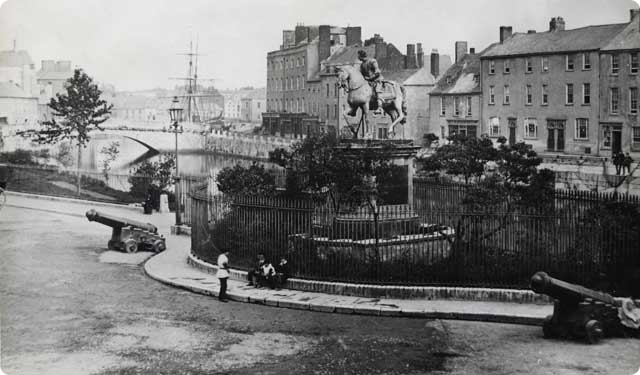 Perhaps the most remarkable of the photographs is the photograph of the statue of George II on horseback. The statue was knocked down and removed in 1863; the photograph must have been taken prior to this, a mere 28 years after the production of the first paper negative.

All the photographs are shown courtesy of Amy and Chris Ramsden who are the owners of the Day collection: Amy Ramsden is the niece of Alec Day.