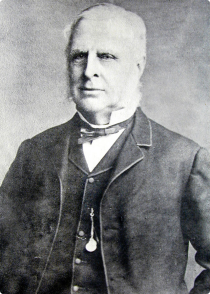 Robert Manning, civil and estate engineer, was born in Avincourt, Normandy, France on 22 October 1816, the third son of William Manning of Knocknamohill near Arklow and Ruth, daughter of Lionel Stephens of Dromina in the parish of Crooke near Passage East. Robert was educated privately at Kilkenny and at Waterford. The first phase of Manning's career as a civil engineer arose from the expansion in 1846 of arterial drainage works as a result of the great Irish famine. In January 1848 he was appointed District Engineer on the Ardee and Glyde works and had to figure out the nature of estuary and flood behaviour.

During the 1860s, Manning carried out extensive scientific studies on aspects of rainfall, river volumes and water runoff and ventured into new areas of theory and practice. In October 1869 Manning was appointed Second Engineer in the Office of Public Works and on 1 April 1874 was appointed Chief Engineer and served in that capacity until 1891. During this time he was in charge of all engineering works of the department, including work at the five Royal harbours, nearly 200 fishery piers and harbours, of which he designed and constructed upwards of 100, and improvement works on the River Shannon (commenced 1880).

Manning studied the classical 19th century experiments on open channel flow in the laboratory and in the field. This resulted in his classic paper in 1889 entitled 'On the flow of water in open channels and pipes'. This was followed by a further paper on the subject in 1895. As a result of his experiments, his monomial formula for open channel flow passed into the standard literature and became one of the building blocks of the modern science of hydrology.