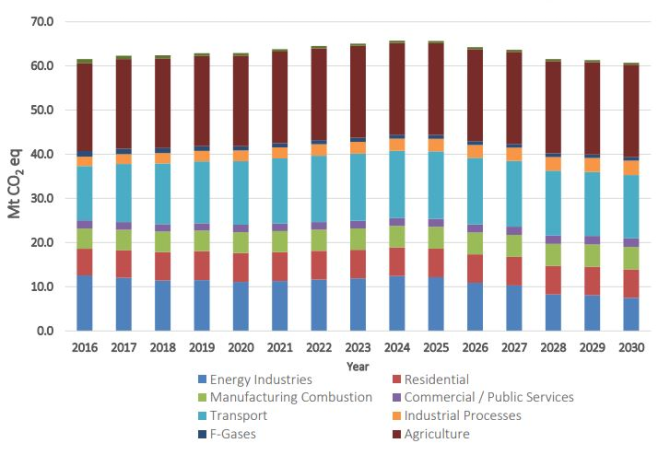 According to EPA projections, Ireland's greenhouse gas emissions are set to increase, with the best outcome resulting in Ireland being the only country in the EU to achieve a mere 1% reduction in emissions by 2020 compared to the target set at 20%.  These projections also note that Ireland is not on the right course to meeting 2030 or 2050 targets (European Commission, 2019). This makes Ireland one of the worst performing countries in the EU, and is ranked 39th out of 61 countries tracked by the Climate Change Performance Index (CCPI, 2021). 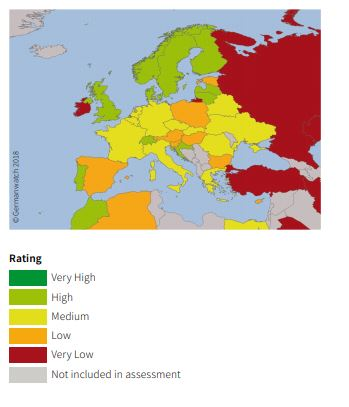 The Climate Change Performance Index (CCPI) results for 2020, ranked Ireland at 39 out of 61 countries evaluated on their performance for climate action. This gives Ireland a “low” overall rating for performance especially in the GHG Emissions category and the Energy Use category. Ireland remains stable in the Renewable Energy category, showing high performance, and in the Energy Use category, with a medium rating. The country, however, ranks very low in GHG Emissions. The improvement in Ireland’s overall performance is based on the rating national experts give to the country’s new climate policies, leading to a jump of 11 spots in that category from 2019 to 2020.

The Irish Parliament has also been commended by national experts for passing the Fossil Fuel Divestment Bill which made it the first of its kind in the world. This bill in addition with the innovative Citizens’ Assembly process, that produced some of Ireland's most progressive climate action policy proposals to date, has brought the country to a medium performance rating  with regards to international climate policy. Nevertheless, the minister of Communications, Climate Action and Environment has stated that it may cost Ireland up to €150 million to pay for carbon credits in compensation for failing to meet 2020 targets. Furthermore, the Irish state may face the threat of multi-billion fines from the EU if it fails to meet its 2030 emissions targets.To view Ireland's performance compared to other countries, please click here.