Devoy: Recollections Of An Irish Rebel 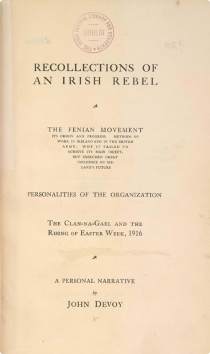 John Devoy was born in Kill, Co. Kildare in 1842 just prior to the Irish Potato Famine (1845-1852) which saw approximately one million Irish starve to death and another million emigrate to America and elsewhere. After Irish defeats by Oliver Cromwell and later by William III of Orange in the 17th century, an Anglo-Irish Protestant ruling class dominated Ireland . The majority of the Catholic Gaelic Irish population lived in dire poverty sustaining themselves on a diet of potatoes. The Great Irish Famine would convince many, Catholic and Protestant alike, that misrule in Ireland could only be remedied by Irish independence from Britain .

From the 17th century Catholics were persecuted by draconian penal laws until they were gradually repealed in the late 18th and early 19th century. After the failed United Irishman rebellion in 1798, the Irish Parliament was absorbed into the British House of Commons in London under the Act of Union 1800. The Irish nationalist Daniel O'Connell MP successfully campaigned for Catholic emancipation but he and other constitutional nationalists failed to win a repeal of the Act Of Union.

Radical republicans who saw themselves as successors of the men of '98 desired complete independence from Britain , the overthrow of the Protestant Ascendancy and land reform. They were involved in sporadic acts of violence during the early 19th century. In 1848 a group of Irish republican radicals called the Young Irelanders, in concert with a wave of European popular revolutions the same year, staged an abortive rebellion. Captured rebels were transported to present day Tasmania while others fled capture to France and the United States .

These men and their ideological successors would become the nucleus for a new wave of radicals in the 1850s and 1860s. The Fenian Brotherhood was founded in America by John O'Mahony and the Irish Republican Brotherhood or IRB founded by James Stephens in Dublin . Armed Fenian militia in the United States staged a series of raids into Canadian territory between 1866 and 1871. The objective was to pressurise Britain to withdraw from Ireland .

By the early 1860s, John Devoy was already active in the IRB, getting military experience with the French Foreign Legion in Algeria before returning to Ireland and organizing the Fenians in Naas, Co. Kildare. He became heavily involved in recruiting Irishmen serving in British military regiments in Ireland and by 1866 had recruited about 80,000. The IRB Council of War planned a rebellion but informers betrayed the plans to the British who substituted the Irish for British troops. Devoy who was arrested in 1866 was sentenced to fifteen years penal servitude for treason.

In early 1867 there were unsuccessful risings in Kerry, Limerick, Cork and Dublin . Most of the rebel leaders were rounded up in advance while the assemblies of rebels were broken up by the police. Three Irishmen were executed for the murder of a policeman during the rescue of two Fenian leaders arrested in Manchester . Also the same year an explosion at Clerkenwell Prison, London , part of another escape plot, caused 12 deaths. Between 1881 and 1885, Fenians launched a campaign of terrorist bombings in London and other British cities. These counter productive incidents created intense anti-Irish feeling in Britain .

Devoy was released in 1871 and was exiled to America . He spoke on behalf of the Irish cause to the U.S. House of Representatives, became a journalist with the New York Herald and was active with Clan na Gael, the successor of the Fenian Brotherhood and sister organisation of the IRB. In 1875 he helped organise the daring escape of six Irish prisoners from Freemantle , Australia aboard a ship called the Catalpa.

In 1879 Devoy helped to bring together the leading republican leaders and Irish Parliamentary Party leader, Charles Stuart Parnell MP (1846-1891). The result was the Irish National Land League which campaigned successfully in the 1880s and 1890s for the rights of Irish Catholic tenant farmers secured by a series of land acts supported by the British Liberals in the House of Commons.

The 'Land War' was largely peaceful however there were some murders of landlords, their agents and tenant farmers who did not comply with the movement. By the early 1900s the majority of the land in Ireland was in the hands of Catholic farmers while the fortunes of the Anglo-Protestant Ascendancy were in terminal decline. Devoy and other republicans helped to organise resistance to evictions, boycotts, agrarian agitation, protests and demonstrations during the period.

Parnell and his successors John Redmond and John Dillon also campaigned for Home Rule in the late 19th and early 20th century overcoming resistance in the Commons and the House of Lords. In 1914 a third Home Rule Act was passed but in Ireland two armed camps, the Unionist UVF militia and the rival nationalist Irish Volunteers were on the verge of civil war. The outbreak of World War I meant the issue of Home Rule was suspended and only a rump of Irish Volunteers were left. The majority National Volunteers followed Redmond who was an enthusiastic supporter of the war.

Behind the scenes veteran hardline republicans including the now elderly Devoy secretly took over the remaining Irish Volunteers and organised the abortive 1916 Easter Rising. Heavy Irish war casualties and renewed separatism swung public opinion in favour of Sinn Féin, eclipsing the Irish Parliamentary Party in the 1918 general election. Sinn Féin and other nationalist MPs assembled for the first meeting of Dáil Eireann in 1919 sparking the Irish War of Independence. During the war, Irish Republican Army guerillas fought the British police and military in Ireland to a stalemate. The result was the parition of Ireland in 1922 under the terms of the Anglo-Irish Treaty.

Devoy supported the 1922 Treaty believing it was a sound foundation for future Irish freedom and eventual reunification of the Irish Free State with the Unionist Northern Ireland created in 1921. Hardline republicans felt betrayed however and attempted to overthrow the Irish Free State government. After a bloody civil war they were defeated in 1923.

John Devoy died in New York in 1928 and was buried in Glasnevin Cemetery , Dublin .

Previous - Davitt: Leaves from a Prison Diary
Next - Griffith: Meagher of the Sword