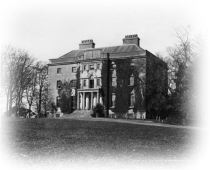 Moore Hall, Carra, Co. Mayo, the home of the Moore Family where the writer George Moore (1852–1933 grew up. It was gutted by fire by the IRA in reprisal for his brother Maurice's pro-Treaty allegiance during the Irish Civil War.

Moore Hall, Carra, Co. Mayo, the home of the Moore Family where the writer George Moore (1852–1933 grew up. It was gutted by fire by the IRA in reprisal for his brother Maurice's pro-Treaty allegiance during the Irish Civil War.

Hail And Farewell! by George Moore is a three volume memoir of Moore’s time in Dublin in the decade prior to the outbreak of the Great War and the Irish Revolution. His observations on the great and the good of Irish society whom he encountered upset many of his friends.

Moore was an anti-clerical, agnostic, modernist bohemian excluding him from the mainstream of Irish political, religious and literary thinking. However he played a part with his friend Edward Martyn in the Irish Literary Revival. Ireland was then dominated by a stand off between two conservative forces; the declining Unionist Protestant Anglo-Irish elite and the rising nationalist Irish Catholic middle class. Moore was simultaneously out of step with both British imperialist and Irish Catholic nationalist moral pieties and hypocrisies he cared little for. The work is a revealing insight into Irish life before it was turned upside down by sweeping social and political change. Moore said of the work that ‘ Dublin is now divided into two sets; one half is afraid it will be in the book, and the other is afraid that it won't.’ Moore Hall, Co. Mayo hosted figures such as Lady Gregory and W. B. Yeats.

George Moore (1852-1933) was the son of a landowning Irish Catholic family from Carra, Co. Mayo. His great uncle, John Moore had been President of the short lived Connaught Republic during the 1798 Rebellion and his father George Henry Moore MP was a founding member of the Catholic Defence Association. Moore performed poorly at St. Mary’s College, Oscott, was expelled and sent home.

When his father died in 1870 and the young Moore reached adulthood, he handed management of the family estate to his brother Maurice and went to Paris to pursue a career as an artist. There he met impressionist painters such as Renoir, Monet, and Degas. Emile Zola influenced him to become a writer. He made many expatriate friends in London and Paris and his realist prose influenced the writer James Joyce. Moore's style broke many sexual taboos scandalizing conservatives. He also had a long term relationship with the society hostess, Lady Cunard.

Moore became estranged from his diametrical opposite, his brother Colonel Maurice Moore, a conservative Irish Catholic nationalist and soldier. Maurice's son, Ulick, was killed in the Great War serving in the Connaught Rangers. Maurice’s republican activities during the War of Independence led to British raids on the family home and his pro-Treaty stance provoked the destruction of Moore Hall by the anti-Treaty IRA. George Moore died in London in 1933. His brother served as a member of the Irish Seanad on behalf of Fianna Fail until his death in 1939.