Shaw-Sparrow: John Lavery and His Work 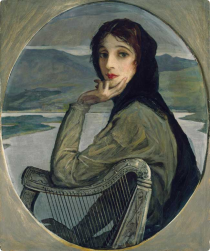 Lady Lavery as Kathleen Ní Houlihan (1928) by John Lavery (1856-1941) is an engraving of the painting which appeared on Irish banknotes for fifty years, until 1977. Central Bank and Financial Services Authority of Ireland Collection. Photographer: Roy Hewson

Lady Lavery as Kathleen Ní Houlihan (1928) by John Lavery (1856-1941) is an engraving of the painting which appeared on Irish banknotes for fifty years, until 1977. Central Bank and Financial Services Authority of Ireland Collection. Photographer: Roy Hewson

John Lavery And His Work by Walter Shaw-Sparrow was published in 1911. It is partly a biography of the Anglo-Irish painter’s life and also partly a chronicle of his prolific artwork in particular of some of the four hundred paintings of his muse and second wife Lady Hazel Lavery.

John Lavery was a Catholic born in Belfast in 1856 and was educated in Glasgow and London and at the Académie Julian in Paris . The private studio school trained French artists as well as many other nationalities but especially American students. Contacts made in Paris would ensure his future contemporaries and friends would  include a varied trans-Atlantic and international community of liberal minded artists, bohemians and political radicals. Lavery was very influenced by so-called plein air painting which was then very fashionable after he went on a number of trips to Grez‐sur‐Loing, south of Paris . Another important influence was the Anglo-American painter James Abbott Whistler (1834-1903) who he closely imitated.

Returning to Glasgow , John Lavery fell in with an ambitious set of young avant garde painters known as ‘The Glasgow Boys.’ Lavery was soon in huge demand with the rich and wealthy after he sensationally secured a commission to paint the royal visit to the International Exhibition that was held in Glasgow in 1888. Queen Victoria herself sat for one of his portraits. His career as a high society painter was assured and he moved to London where he lived for much of his life in wealth and luxury. He married Kathleen MacDickmott in 1888 but she died in 1891 from tuberculosis after the birth of their only child, Eileen, the future Lady Sempil.

Lavery is best known for his second marriage to the beautiful and glamorous Hazel Martyn (1886-1935) later better known as Lady Lavery, the daughter of a wealthy Irish-American industrialist. The couple became acquainted in 1904 when she was already married to Edward Livingston Trudeau Jr, a physician who died five months later. Lavery himself married her in 1909 and their relationship would prove to be tempestuous. He would immortalise her in hundreds of portraits one of which would famously feature on Irish banknotes following Irish independence in the 20th century. Together they had one daughter named Alice who also featured in Lavery's paintings.

Hazel claimed descent from a family who were once one of fourteen ‘tribes’ of mixed Irish, English, Welsh, French and Norman descent who ruled Galway in the late medieval and early modern eras. The Laverys came to know and corresponded with many famous individuals in politics and the arts such as future British Prime Minister, Winston Churchill MP, who was the son of an American mother, the playwright, critic and Fabian, George Bernard Shaw, the mystical Anglo-Irish poet and nationalist, William Butler Yeats who founded the Abbey Theatre and many more. They also became friendly with many radical Irish nationalists including Maude Gonne and others who favoured violent revolution in Ireland .

During World War I, Lavery was appointed an official artist but ill health prevented him from visiting the frontlines before he was almost killed in a car accident during a German Zeppelin airship bombing raid on London . He painted the portraits of the politically powerful Asquith family and used his time at their Thames side residence at Sutton Courtenay to paint outdoors.

Lavery and his wife due to their high level connections in Ireland and Britain played a murky role as go-betweens and facilitators in secretive bargaining by the British government with Irish republican revolutionaries ahead of the negotiation of the Anglo-Irish Treaty of 1922. There is considerable historical controversy concerning the eccentric Lady Lavery's friendships with young Irish revolutionary leaders such as Michael Collins and Kevin O’Higgins. Hazel was in danger when she came under suspicion from Collins’ hard-line republican rivals within the IRA who believed she was a double agent.

Many embittered opponents of the Treaty accused Collins and his delegation who met with Prime Minister Lloyd George and Winston Churchill and others of being influenced by British high society figures they met informally through the Laverys into agreeing terms short of full Irish independence. Michael Collins later became Chief of Staff of the National Army and was assassinated in the subsequent Irish Civil War in August 1922. Hazel Lavery was grief stricken when she heard news of the death of her 'sweetheart.'

Kevin O’Higgins as Minister of Justice signed the execution warrants of many former Irish republican comrades including senior IRA commander Rory O’Connor who was once his best man at his own wedding. O’Higgins was himself shot by IRA assassins in July, 1927. The deaths of these and other friends had a profound impact on John Lavery. During the 1922 peace talks, Michael Collins sat for a Lavery portrait that was later presented to his fiance Kitty Kiernan. Kiernan who later married Irish Free State officer Felix Cronin hung the portrait in her home until her death in 1945. John Lavery also painted a famous portrait of the body of Collins lying in state entitled Michael Collins, Love Of Ireland.

John Lavery accepted a knighthood, was inducted in the Royal Academy in 1921 and donated many of his works to the Ulster Museum and the Hugh Lane Municipal Gallery (his friend Lane was killed when the Lusitania was sunk by a German U-boat in 1915). In the 1930s he returned to Ireland and accepted honorary degrees from the University of Dublin and Queen's University of Belfast but continued to hold exhibitions in Glasgow . His wife Hazel died in 1935 and John Lavery followed her in 1941 at the age of 84.