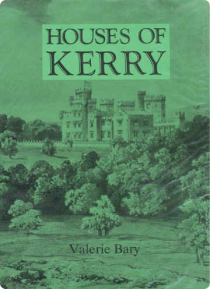 From Houses of Kerry, by Valerie Bary.

The "Big Houses" of Kerry vary greatly in size. Most of them are comparatively modest, perhaps because the county has been so far from the seat of government that the desire to demonstrate power and wealth was not a necessity. Many appear to be overgrown farmhouses and not all that different from those of conscientious tenants. The difference is most apparent in the lay-out of gardens and woods and, of course, in the interiors.

North and South Kerry are different countries. North Kerry suffered severely from the Earl of Desmond's rebellion in 1583. South Kerry remained comparatively quite under Macarthy Mˇr, the Earl of Clancare. Following Cromwell's war (of 1649) the whole county was granted, in parcels, as payment to Cromwellian army officers. But it was not a simple as that: many of the officers sold their apportioned lands; some of them, in any case, had been living on these lands since 1583; others had intermarried; others, again, took the former Irish Catholic landowners back on their lands as tenants. The neutral Irish, too, like MacCarthy Mˇr, had their lands regranted.

In North Kerry, the land had been under Protestant ownership for nearly 60 years, so the changeover to new ownership was scarcely noticeable. The two great Gaelic landowners withdrew: Fitzmaurice to France, leaving Lixnaw Old Court and the charming Dromin House as his testaments, while Fitzgerald, Knight of Kerry, in the next century, moved to the south of the county leaving, in his turn, romantic Ballinruddery.

In South Kerry, some of the lands were unchanged because of the neutrality of Macarthy Mˇr. In other parts, the new, great landlords granted leases to the former Gaelic owners, with the result that here the population became mixed Gaelic and Cromwellian and seems to have lived without stress or rancour. Some of the Catholic tenants made fortunes and lived in comparative affluence, so that they were accepted as "landlords" by the rest of the populace. For example the Protestant Godfreys of Kilcoleman became debtors to the Roman Catholic O'Connells of Derrynane. The families intermarried. Very few of the owners of early houses in North Kerry had Irish family names: many such dwellings in South Kerry were built by Gaelic families.

In the nineteenth century, with influence from France and England, Kerry houses became less like farmhouses. They had impressive halls and stairways, as at Ballintaggart and Fermoyle and the lovely, ruined Bahoss; there were great chimney stacks, sometimes decorated and covering all, or much of, the roof; their doorways were widened and the surrounds became more ornate; occasionally there would be a portico. The houses more often, now, stood well away from their stables and farmyards.

During the Georgian era (1714-1830) houses of one storey, over a basement, appeared. Often they were built as hunting lodges, or for holidays. Some disappeared quite quickly, but others were constructed to high standards and remain today, such as Cloonnagillan and Foildarigg.

Most of the early construction of these houses was done with rubble, but later, with blocks. Occasionally, as at Ballyraemeen, tamped earth was used. This could be an excellent process, if kept well drained. Bricks were rarely used, although occasionally they were found around windows, doors and chimneys, in early houses. Examples can be seen at Kinneigh, Flesk Cottage, Killarney and Killelton House.

Nomenclature followed the same style over the whole county. The main body of houses was named for their Irish townlands, but a number indicated a description of the area in which they stood such as Seaview, Flintfield and Church Hill; some were named for wives as in Ann's Villa and Jane Mount. The most amusing names of houses were jokes about small lodges such a Barnacle Lodge, Oyster Hall, Grouse Hall, all of which have now crumbled away.

Many aspects of the history of Kerry houses wait for more research. Why, like Blennervile, should there once have been prosperous houses around what is now a small, defunct port with no known early history? Why were two houses made ready for Queen Marie Antoinette and what was the background of those rescue attempts? Why have we believed that families such as the McCarthys of Coshmaine were wiped out, when we had Gortnaaglough, all the time, to confirm otherwise? What is the fascinating history (with overtones of Daphne du Maurier) behind the smuggling cliffs of Meenoghane?

This study has shown, more than clearly, that research on old houses is a detective hunt which will never end.