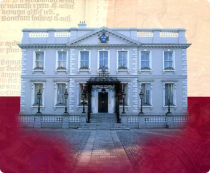 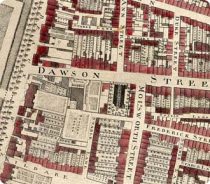 The Mansion House was built in 1710 by the merchant and property developer Joshua Dawson, whose name is commemorated in Dawson Street.

Dawson originally lived in this house himself, but at the time, Dublin was looking for an official residence for the Lord Mayor and when the City Fathers heard about this splendid new mansion, they decided to acquire it.

On the 25 April 1715, the Corporation purchased the house at a cost of Ł3,500 and also agreed to pay a yearly rent to Dawson of forty shillings and a loaf of double-refined sugar weighing six pounds each Christmas.

In return, Joshua Dawson agreed to build on an extra room to the house which could be used for civic receptions - the famous Oak Room.

Dublin was the first city in Ireland or Britain to have an official residence for its Lord Mayor.


The Mansion House is not unique in having been planned and built as a private residence for a wealthy individual, and later taking on a public function. Most of Dublin's great mansions now have a civic or political role.

The Mansion House is unique, however, in that it retains its residental function in addition to its public function.

Most of the surviving great houses were built during the eighteenth century and many went out of private ownership after the Act of Union in 1800.