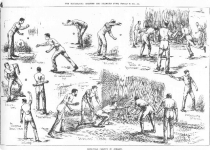 Handball, as may be supposed, is played with the naked hand, and either singly or with partners. The following are the generally accepted rules:

The players toss for innings; the winner begins the game by hopping the ball against the ground and striking it against the wall above the tell board, and so that it may rebound to fall outside the over-line; the other player then strikes it in the same manner, either before it has touched the ground, or hopped more than once; the first player then prepares to receive and strike it at its rebound; and thus the game goes on, until one of the players fails to strike the ball in his turn before it has hopped more than once, strikes it below the tell-board, drives it out of the court, or knowingly hinders his opponent's stroke. If the party who is in does either of these things he loses his innings; if the other, then the player reckons one on each occasion towards the game, which is eleven, fifteen, or twenty-one as previously arranged. When partners play, the rules are precisely the same, each side keeping up the ball alternately, and the partners taking their innings in rotation, after all their opponents have been put out. After the ball is first played out, on each occasion, it is not necessary to make it rebound beyond the over-line, which is used to make the player who is in give out the ball fairly in the first instance – that is, when he takes his innings, or when he plays out the ball after scoring a point. Handball is of course a form of 'fives'.

Next - The Early Game