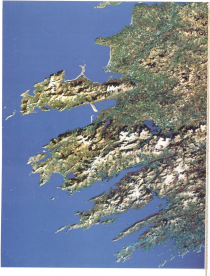 The Mountains of Kerry

The heavy mountain concentration is in the centre of the Dingle, Iveragh and the Kerry section of the Beara Peninsula. Iveragh is the biggest of the three peninsulas and has the highest mountains. Carrauntohill at 3,414 feet is, of course, the highest in Ireland.
á

Mount Brandon on the Dingle Peninsula is Ireland's second highest peak. It is more accessible than Carrauntohill and is a popular mountain of pilgrimage closely associated with St. Brendan, the patron saint of Kerry.
á

Not surprisingly mountaineering is a popular recreational activity in County Kerry.
á

In 1954 after the successful revival of the traditional pilgrimage to Mount Brandon it was decided that a formal structure was needed and the Tralee Mountaineering Club was formed.


It has the distinction of being the record oldest climbing club in Ireland.

Annual calendar produced by Tralee Mountaineering Club.It consist of articles,photographs and activities during the year