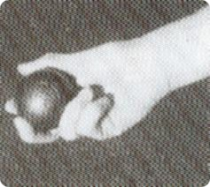 This depicts a road bowling ball.

This depicts a road bowling ball.

Bowl playing, road bowling, road bowls. The terms are familiar to all followers of the sport. To the uninitiated, the variation in descriptive terminology serves to generate intrigue with a competitive game which is unique in its history.

The sport is played with a 28 oz. (793.8 grams) solid iron bowl, or ball, with a circumference of approximately 18 centimetres. Two contestants match their individual skills in throwing the bowl with optimum speed, controlled delivery, and international accuracy along a carefully considered and tactically selected play - path over a predetermined course distance of normal roadway. The winner is the player to reach the finishing line in the least number of throws or shots.

Course distances vary in accordance with the nature of the contest, which nowadays are usually around four kilometres in length. A score, or match, between two road bowlers may be watched by anything from several dozen spectators to many thousands, depending upon the importance of the event and the attraction of the particular pairing involved.

In Ireland numerous bowling courses exist in counties Armagh and Cork (where the sport is more prevalent) and also in Mayo (Castlebar), Limerick, Waterford and Louth.

In more recent times courses (roads) have been developed in Tyrone and Wexford and also in London (G.B.). Furthermore there is now a course in Boston (U.S.A.).